Conserving marine biodiversity through a network of Marine Protected Areas 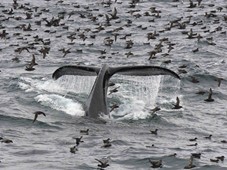 The global marine environment faces a multitude of threats, yet only 1.1% of the world’s seas are under any form of protected area designation, compared to 11% of the earth’s land surface. BirdLife International’s Global Seabird Programme is working to address these threats by identifying key sites for conservation (marine Important Bird and Biodiversity Areas).

The marine environment faces a multitude of threats ranging from overfishing and habitat loss, to pollution, alien species and the impacts of climate change (Costello et al. 2010). Despite these threats, only 1.1% of the world’s seas hold a protected status, compared to 11% of the earth’s land surface.

BirdLife International’s Global Seabird Programme is working to address these threats, and to ensure that staff time and financial resources are most effectively targeted, by identifying key sites for conservation (marine Important Bird and Biodiversity Areas), and demonstrating effective approaches to conservation.

Between 2008 and 2011, support from the Aage V. Jensen Charity Foundation enabled the BirdLife marine IBA programme to make major advances. At the beginning of the project, several Partners were beginning to engage in marine IBA work, but knowledge exchange between them was limited. AVJCF support allowed BirdLife to develop a standardised marine IBA toolkit, and coordinate and expand the work within the Partnership in a consistent and comparable way.

This support also enabled BirdLife to promote marine IBAs within the international Marine Protected Area and marine spatial planning processes. BirdLife took part in key workshops related to marine components of the Convention on Biological Diversity (CBD) Programme of Work on Protected Areas, which led to the designation of marine IBAs as Ecologically and Biologically Significant Areas (EBSAs). AVJCF also supported BirdLife’s work with the European Union on the designation of marine IBAs as Special Protected Areas (SPAs) under the Birds Directive.

In the field, conservation activities including surveys and invasive species eradications have continued at priority sites in Asia and the Pacific. Seabirds have begun to re-establish colonies on islands from which rats have been eradicated, and island communities have benefitted from increased crop yields. These sites are serving as demonstrations for the restoration of island ecosystems throughout the world.

BirdLife launched The e-Atlas of Marine Important Bird Areas at the Eleventh Conference of the Parties to the Convention on Biological Diversity (CBD) in 2012. As the first global inventory of important sites for the conservation of migratory marine species, the e-Atlas will be a vital resource for meeting the CBD target of protecting 10% of marine and coastal areas by 2020. Beyond the conservation sector, it also provides essential information for regional fisheries management organisations, oil, gas and windfarm developers, and marine pollution management planners.