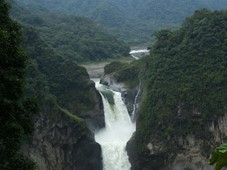 Amazonia is the ultimate biodiversity-rich wilderness, encompassing more than 6 million km2 in nine South American countries. Within its borders lies the largest river system on Earth, and more than half the world's remaining tropical rainforest. The Amazon is also home to a wealth of indigenous human cultures. But like the biodiversity they depend on, the future of these tribes is threatened. In 2006, the Aage V. Jensen Charity Foundation approved a grant to support BirdLife International and national partner SAVE Brazil in the development of a simple but effective blueprint for conservation of Amazonian biodiversity.

In the Brazilian Amazon, deforestation has averaged 1.8 million hectares per year since 1998, the highest rate for any tropical forest area. Major drivers of deforestation include agricultural expansion (Morton et al. 2006), transboundary road developments (Pfaff 1996) and oil and gas extraction (Finer et al. 2008). These threats arise from insufficient consideration of biodiversity conservation in the plans and policies of commercial sectors.

In 2006, the Aage V. Jensen Charity Foundation approved a grant to support BirdLife International and national partner SAVE Brazil in the development of a simple but effective blueprint for conservation of Amazonian biodiversity. The project set out to identify the highest priority sites, using BirdLife's Important Bird and Biodiversity Area (IBA) criteria, and integrate them into other national and regional policy sectors, particularly agriculture, forestry, mining, transport and urban development.

Over the next few years a total of 130 IBAs were identified in the Amazon basin: 14 in Bolivia, 42 in Brazil, 10 in Colombia, 7 in Ecuador, 9 in French Guiana, 8 in Guyana, 13 in Peru, 9 in Suriname and 18 in Venezuela. The results were incorporated in Brazil's second IBA directory, and in the regional directory, Important Bird Areas Americas - Priority Sites for Biodiversity Conservation.

All IBAs are priorities for conservation. But with limited time and resources, action is more urgent for some than others. Priorities were set by combining measures of threat with a measure of biological importance based on IBA criteria. Each national partner held workshops with local people, NGOs and government, to obtain firsthand information about threats to IBAs.

In 2010, the project published the Amazon IBA brochure, a technical briefing paper providing an overview of the network of the Amazonian IBAs in each country, the highest national and regional priority sites, and the threats posed by regional development projects. The brochure is available in Spanish, Portuguese, French and Dutch, and has been distributed to governments, development and multilateral funding agencies, and NGOs.

The project and resulting publication has raised the profile of IBAs as a conservation planning tool within the Amazon Basin, and of the project partners as key players in Amazon conservation. For example the IBA directory is being used as a reference document for the Ecological-Economic Macro-zoning of the Brazilian Amazon. At a regional level the World Bank and other multilateral development banks are increasingly looking to IBAs to help them apply their environmental safeguards to development projects in the Amazon.