Conservation for birds and other biodiversity in Asia: a guide for governments and civil society 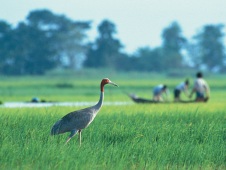 In 2003, a BirdLife analysis identified key wetland, forest and grassland regions in Asia. This analysis has been published as a guide to the immediate measures that need be taken by governments and civil society to conserve these habitat regions.

Asia has many diverse habitats, ranging from Arctic tundra to tropical forests, and including the highest mountains in the world. But the region is experiencing rapid environmental change as the human population and national economies grow, and many of Asia’s natural habitats and their immensely rich wildlife are now under great pressure. Roughly a quarter of all bird species in Asia are of global conservation concern, including 344 globally threatened bird species (BirdLife International 2001, 2008).

Many of these threatened birds have similar ranges and habitat requirements. By grouping species of overlapping range according to their shared habitat, a BirdLife analysis (funded by the Critical Ecosystem Partnership Fund of Conservation International) identified 20 key wetland regions, nine key forest regions and three key grassland regions in Asia (BirdLife International 2003). It is clearly more efficient to consider the conservation of these 32 habitat regions than to address the conservation needs of the 344 bird species individually. This habitat-based approach also makes it easier to relate bird-conservation issues to land-use planning processes, and the key regions can also be related to other broad geographical analyses of conservation priorities (Stattersfield et al. 1998, Mittermeier et al. 1999, Wikramanayake et al. 2002).

This analysis has been published as a guide to the immediate measures that need be taken by civil society and governments to conserve the habitat regions. These measures include greater integration of environmental objectives into all socio-economic sectors, and more stringent environmental assessment of existing and proposed development policies, plans, programmes and projects. In the longer term, the underlying and indirect root causes of biodiversity loss in Asia will also need to be tackled. The guide outlines the fundamental changes in land- and resource-use that are needed for this.

Conservation organisations can implement many of the proposed conservation measures, such as surveys and ecological studies, education and awareness activities. For many other actions, the leadership of governments and the corporate sector is also necessary. Many of the strategic measures that are recommended will go a long way towards conserving not just globally threatened bird species, but all elements of biodiversity in the wider environment.

Recommended Citation:
BirdLife International (2008) Conservation for birds and other biodiversity in Asia: a guide for governments and civil society. Downloaded from http://www.birdlife.org on 29/01/2023