Conservation and wise use of Lake Natron, Tanzania 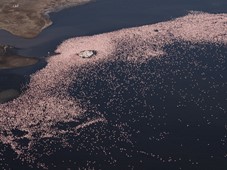 In 2006, Lake Natron in Northern Tanzania, famous throughout the world for its spectacular congregation of Lesser Flamingos Phoeniconaias minor, became the focus of international concern when a company supported by the Tanzanian Government unveiled proposals to extract soda ash from the shallow saline waters.

Soda ash extraction was proposed and backed by the Tazanian government at Lake Natron in 2006. Following intense opposition from the BirdLife Partnership and a consortium of local, national and international organisations known as the Lake Natron Consultative Group, the company proposing extraction withdrew its proposal. But the Tanzanian Government made it clear that the option of soda ash mining at Lake Natron was still open.

Lake Natron is the Lesser Flamingo’s most important breeding site, and East Africa is home to perhaps three- quarters of the global population. Like other flamingo species, it breeds at irregular intervals and changes breeding sites for reasons that are not fully understood, but it is very susceptible to disturbance.

To consolidate the success of its campaign, BirdLife International turned to the Aage V. Jensen Charity Foundation for funding for a project which would ensure the long-term protection of Lake Natron, while improving the livelihoods of the lakeside communities. The project has created a constituency for the conservation of Lake Natron among local people, 80% of whom now oppose soda ash extraction.

The project was implemented by two BirdLife Partners, the Wildlife Conservation Society of Tanzania (WCST) and Nature Kenya, and the Wetlands Unit of the Tanzanian Government’s Wildlife Division. An early meeting brought together local community and civil society organisations and government agencies, ensuring that the project enjoyed the consent and participation of everyone with an interest in the lake and its resources.

The project has made considerable progress in providing opportunities for more secure and sustainable livelihoods. Among other initiatives, a community cultural boma (a traditional enclosed camp) has opened, offering facilities for tourists and providing employment for 110 Maasai women. WCST delivered skills training to 30 local guides, who are now certified by the Tanzania Tourist Board.

Water users’ associations have been formed in two villages close to the flamingos’ breeding colony. They are responsible for ensuring that water is used sustainably, and that fresh water is available for the flamingos during breeding. More water flows into Lake Natron, and there is less conflict over water among the community. Three Site Support Groups comprising 150 people have been established, and a growing number have been trained in biodiversity monitoring work.

One of the project’s most influential contributions has been a Cost Benefit Analysis, which showed that over a period of 50 years, soda ash mining would make a loss, while sustainable livelihoods and ecotourism would contribute to local and national economic growth. There is strong grassroots support for the project, and the future of Lake Natron, its people and its flamingos, looks much more secure.

Recommended Citation:
BirdLife International (2015) Conservation and wise use of Lake Natron, Tanzania. Downloaded from http://www.birdlife.org on 26/11/2022