Conservation actions have prevented up to 18 bird extinctions since 2010 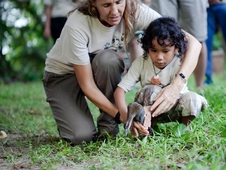 The Convention on Biological Diversity (CBD)’s Aichi Target 12 aimed to prevent the extinction of known threatened species by 2020. Although this target was not fully met, conservation action has prevented 9-18 bird extinctions during this period, and 21-32 since the adoption of the CBD in 1993.

Probability that particular threatened bird species would have gone extinct during 2010-2020 in the absence of conservation action.

Points and lines show minimum, best and maximum estimates, averaged across all individuals involved in the expert elicitation exercise (see Bolam et al. 2020 for detailed methods). The probability is set to 1 by definition for species classified as Extinct in the Wild. Bolam et al. (2020)

In 2010, the Parties to the Convention on Biological Diversity (CBD) adopted 20 ‘Aichi’ biodiversity targets to be met by 2020. Target 12 stated that ‘By 2020 the extinction of known threatened species has been prevented and their conservation status, particularly of those most in decline, has been improved and sustained’. To quantify the extent to which this was achieved, 28 bird and 26 mammal experts evaluated the probability that bird and mammal species would have gone extinct in the absence of conservation action (Bolam et al. 2020).

Based on information on species’ population size, trends, threats and the conservation actions implemented for them, the authors estimated that, since the adoption of the CBD in 1993, conservation action had prevented 21-32 bird species extinctions. During the same period, 10 bird species were confirmed or suspected to have gone extinct, meaning that the extinction rate would have been 3.1-4.2 times higher in the absence of conservation. During the period of implementation of the Aichi Targets (2010-2020), 9-18 bird species would have gone extinct in the absence of conservation actions, while only one species (Algoas Foliage-gleaner Philydor novaesi) was actually declared extinct (although time-lags in detecting extinctions mean that this total may increase in the future). The number of bird extinctions in the last decade would therefore have been an order of magnitude higher without conservation (or at least 2-4 times higher if pre-2010 extinction rates continued through the last decade).

The most frequently implemented conservation actions for the species estimated as likely or almost certain to have gone extinct in the absence of such actions were invasive alien species control, ex situ conservation, and site/area protection, corresponding to the greatest threats faced by these species (invasive species, habitat loss through agriculture, and hunting). For example, Fatu Hiva Monarch Pomarea whitneyi from French Polynesia would very likely have been driven extinct by invasive alien rats had these not been controlled under a conservation programme, while Mangrove Finch Geospiza heliobates from the Galapagos Islands, Ecuador, only survived owing to predator control and management of introduced nest parasites. Six species survived only in captivity, with one of these — Guam Rail Hypotaenidia owstoni — successfully reintroduced into the wild since 2010.

While Aichi Target 12 was not fully met (Secretariat of the Convention on Biological Diversity 2020, BirdLife International 2020), these results show that the rate of extinction would have been considerably higher without conservation action, and that preventing extinctions is eminently feasible, with sufficient resources and political will.

Recommended Citation:
BirdLife International (2020) Conservation actions have prevented up to 18 bird extinctions since 2010. Downloaded from http://www.birdlife.org on 07/02/2023

Key message: Species can be saved from extinction
Case studies