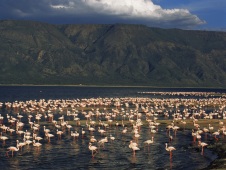 Species from a variety of families show congregatory behaviour at some stage of their life cycles. Congregatory behaviour can be advantageous, but can also increase vulnerability to site-based threats; in some species loss or degradation of a few key sites may affect a high proportion of the global population and can therefore have a serious impact.

Congregatory behaviour is a feature of many bird families and often occurs at particular stages of the life- cycle. While some species congregate to breed, others congregate during the non-breeding season. Among seabirds congregatory behaviour occurs in penguins, albatrosses, shearwaters, tropicbirds, boobies, cormorants, frigatebirds and auks. Congregation is particularly common in waterbirds including many pelicans, herons, egrets, ducks, geese and swans, storks, shorebirds and other waders, gulls and terns. Lesser Flamingo Phoenicopterus minor in east and southern Africa rely on a handful of large soda lakes and pans, mainly within the Great Rift Valley, for feeding and nesting. Millions of birds may congregate at a single site, moving on to another when local conditions change. Conservation of each of these sites is vital for the species’ continued survival. Some migratory waterbirds are heavily reliant on a small number of suitable stopover sites, at which most of the population may congregate over a short time period to refuel and rest while on migration. Congregation offers advantages, including providing ‘safety in numbers’ from natural predators, but can also increase vulnerability to site-related threats. Destruction or degradation of key sites can have serious impacts on congregatory birds at the population level. For example, alarming declines in the Red Knot population Calidris canutus rufa appear to have been driven by over-harvesting of their food supply for human use at a key stopover site in Delaware Bay, USA (Baker et al. 2004, USFWS 2007).

Although less common in landbirds, congregatory behaviour occurs across a wide taxonomic range, including many birds of prey, some storks, sandgrouse, some parrots and macaws and many swifts, plus a few representatives from among the many families of perching or passerine birds. Many migratory birds of prey, storks and pelicans travel using soaring flight. They use the rising currents of warm air generated over land during the day, and therefore tend to migrate by day and minimise distances crossed over water. These soaring birds may congregate in large numbers when passing through migratory bottlenecks such as mountain ridges and passes, narrow coastal plains, isthmuses and peninsulas. Lying at the crossroads between Europe, Africa and Asia, the Middle East serves as a natural bridge for birds migrating between their breeding areas in Europe and Asia, and their winter quarters in Africa. A good example of this is the 500 million birds of over 230 species that pass through Jordan and Israel to avoid crossing the Red Sea in autumn and spring. The entire population of some species, such as Lesser Spotted Eagle Aquila pomarina, cross the area twice a year. It is clearly vital that important and irreplaceable sites in areas such as these are appropriately conserved (Anon. 1990, Zalles and Bildstein 2000, BirdLife International 2003).

Recommended Citation:
BirdLife International (2008) Congregation at particular sites is a common behaviour in many bird species . Downloaded from http://www.birdlife.org on 08/08/2022