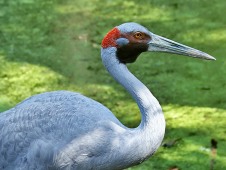 An atlas project in Australia shows that species richness declined in many parts of eastern Australia between 1977–1981 and 1998–2002, particularly in those that had recently lost significant areas of native habitat. 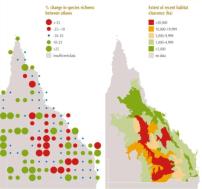 Beginning in 1977, an ambitious five-year project mapped the distribution of the birds of Australia (Blakers et al. 1984). Twenty years later, an update of the atlas was carried out between 1998 and 2002 (Barrett et al. 2003). Although the two atlases represent only snapshots in time of bird distributions—and differences between them may not necessarily reflect long-term trends—some broad patterns emerge from a comparison. Of the 422 mainland bird species for which reliable data were available, 48% showed no change, 37% were recorded more frequently and 15% less frequently during the second atlas period (Olsen et al. 2003). These figures seem to indicate a broadly favourable situation, but the picture is not quite so simple.

In eastern Queensland, for example, declines in species richness of 10% or more were noted for 27 one-degree squares (Olsen et al. 2003). Over the last 20 years, Australia has lost c.10 million hectares of native vegetation, with large losses in south-east Queensland (Olsen et al. 2003). A comparable number of squares showed increases over the same period, but (reflecting the pattern for the continent as a whole) many of these were in the more arid interior of the state. These increases were probably due to the unusually high rainfall experienced during the 1998–2002 atlas period, which provided temporary, rich breeding habitat for a number of species, and probably masked longer-term trends.