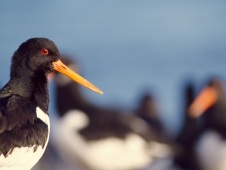 Until 2004, mechanical dredging for cockles was permitted across 75% of the intertidal flats of the Dutch Wadden Sea. This method of harvest removes not just the targeted cockles but other bivalves, as well as polychaetes and crustaceans. Indeed, all organisms larger than 19 mm are lost from the top 5 cm of substrate (van Gils et al. 2006). This reduction in invertebrate prey resources has been implicated in the decline of Europe’s wintering population of Red Knot (van Gils et al. 2006). Unsustainable levels of mussel exploitation have also occurred at the Dutch Wadden Sea resulting in periodic collapses in mussel stocks and the subsequent mass mortality of Eurasian OystercatcherandCommon Eider (Ens 2006). Similarly, at the Wash estuary in eastern England, heavy fishing pressure has led to the loss of shellfish-eating birds and a shift towards worm-feeding species (Atkinson et al. 2010).

The unsustainable exploitation of shellfish can have a devastating impact on some bird populations. The Nearctic-breeding subspecies of Red Knot C. c. rufa undertakes one of the world’s most remarkable migratory journeys. Each year, the population moves between the Canadian high Arctic and Tierra del Fuego, the southernmost tip of South America. This constitutes a round trip of 30,000 km (Baker et al. 2004). Along the route, the birds stop at a number of highly productive staging sites to refuel. The most critical of these sites during the northward migration is Delaware Bay in the USA. Virtually the entire rufa populationpasses through the bay in spring, coinciding their arrival with the mass spawning of the Atlantic horseshoe crab Limulus polyphemus. For a few brief days, the knot feed voraciously on the superabundant supply of eggs, building up sufficient fat reserves to enable them to accomplish the final 3,000 km flight to their Arctic breeding grounds (Niles et al. 2007).

Unfortunately, in recent years, the population of the rufa subspecies has declined dramatically. At one time the population numbered between 100,000–150,000. Today, there may be as few as 18,000 and the race is at significant risk of extinction (Niles et al. 2007). Over the same period, the Atlantic horseshoe crab population has also crashed due to overharvesting of adult crabs for bait in the conch and eel fisheries. In order to survive the flight on to the breeding grounds, the birds must effectively double their mass before departing from Delaware Bay; however, the shortage of crab eggs has made this increasingly difficult. Research conducted between 1997 and 2002 showed that the number of birds achieving an adequate body mass had declined by more than 60% (Niles et al. 2007). Although the harvesting of horseshoe crab has now been banned in New Jersey in order to protect the imperiled waders of Delaware Bay, the rufa subspecies has yet to show signs of recovery.