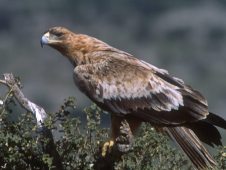 Collision and electrocution by powerlines are considered to be a major cause of death for large-bodied bird species such cranes and raptors. Given that the number of powerlines is set to rise in the coming years, mitigation measures are urgently required to reduce the negative impact of powerlines on birds.

Power lines are a major cause of non-natural mortality for various species of birds across the globe (Lehman et al. 2007; Jenkins et al. 2010). In the United States alone, it is estimated that up to 64 million birds are killed each year at power lines (Loss et al. 2014). Collisions with wires affects large-bodied and migratory species characterized by low flight manoeuvrability (e.g. cranes, swans and bustards), whilst electrocutions on pylons significantly affect large raptors (Rubolini et al. 2005; Andriushchenko & Popenko 2012).

Ludwig’s Bustard Neotis ludwigii is a large and wide-ranging bird endemic to south-west Africa. Due to its field of vision, when scanning for foraging sites it is blind to what lays ahead making it extremely susceptible to collisions with power lines during its daily flights to and from roost sites (Martin & Shaw 2013). An estimated 4,000-11,900 birds are killed annually on high-voltage transmission lines (Jenkins et al. 2011). With the population estimated to be 114,000 (Shaw et al. 2015), the current level of mortality is unsustainable. This resulted in the up listing of its conservation status from Least Concern to Endangered.

In South Africa, mortality from power lines is widely considered to be an important contributory factor in the decline in range and numbers of the Endangered Cape Vulture Gyps coprotheres and the Critically Endangered African White backed Vulture G. africanus. Vultures routinely perch and roost on power line structures. Due to their large wingspan they can easily span the distance between energized and ground components of power lines (Lehman et al. 2007). Vultures are long lived species with low reproductive rates and low natural mortality rates; increases in the mortality rate, as a result of electrocution, upset the population dynamics and lead to a regional population decline. Population models indicate that Cape Vulture populations in areas with high concentration of powerlines are likely to go extinct, from electrocution mortality alone, within 20–35 years (Boshoff et al. 2011).

The global network is growing at a rate of about 5% annually, due to increasing energy demands. Unless appropriate mitigation measures are put in place the number of bird fatalities is likely increase (Perez-Garcia et al. 2011). In Spain, the Spanish Imperial Eagle Aquila adalberti (Vulnerable) loses 30% of juveniles to electrocution on power lines each year. Simple, inexpensive alterations to the design of power line poles could reduce annual mortality by more than 50% (Janss and Ferrer 2001).