Collaboration between conservationists and local religious leaders can safeguard IBAs 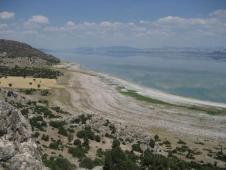 An innovative environmental campaign coordinated by Doğa Derneği (BirdLife in Turkey) is helping to conserve an important wetland ecosystem in southern Turkey. By aligning with respected local religious leaders, conservationists have been able to raise awareness about wetland conservation and sustainable water use throughout a community—fostering significant local support that will help safeguard the area’s wildlife.

Burdur Gölü (Lake Burdur), a large saline lake in southwestern Turkey, is an Important Bird Area (IBA) and a ‘Wetland of International Importance’ (Ramsar site). The lake is the world’s most important wintering site for the threatened White-headed Duck Oxyura leucocephala (Kirwan et al. 2008). In some years over two-thirds of the global population congregates here, with, for example, 10,927 individuals recorded in February 1991 (Green and Anstey 1992). Since the early 1990s, however, the Turkish wintering population appears to have experienced a significant decline, with only 653 birds recorded in 2001 (M. A. Tabur in litt. 2005). Over the same period, Burdur Gölü has faced increasing degradation from urban and industrial development, as well as pollution. Most seriously, the over-abstraction of water for the irrigation of nearby agricultural land has led to a considerable drop in the level of the lake. Not only has this unrestricted water use threatened the ecological integrity of the area, it has also resulted in a significant decline in crop productivity and soil quality. In addition, low levels of environmental awareness among the local population—who have typically seen conservation at odds with economic development and progress—have proved a barrier to the sustainable management of the site.

In order to raise awareness about the ecological and economic importance of Burdur Gölü, Doğa Derneği (BirdLife in Turkey) launched the ‘Conserving Lake Burdur Project’. The project is supported by the UNEP/GEF Wings Over Wetlands (WOW) initiative—a partnership of international conservation organisations and national governments that aims to conserve migratory waterbirds along the African–Eurasian Flyway. Through the project, over 1,500 local farmers from 44 villages have been trained on the use of drip irrigation—a technique that saves both water and fertilizers by slowly releasing water directly to the roots of plants. Through collaboration with the Ministry of Education, a special education programme has been devised for local school children ages 6–14 years, and has been delivered in more than 30 primary schools. The programme aims to foster a greater appreciation of wetland habitats and species and especially the ecological services they provide.

The most innovative, and perhaps the most significant, approach has been to forge an alliance with Burdur’s Provincial Mufti. Working together, Doğa Derneği, the Provincial Mufti and the Burdur Centre Ulu Mosque Imam Nuri Çınar drafted a sermon advocating better water management and highlighted the responsibility of humans in protecting the environment and wildlife. It is estimated that the sermon reached approximately 52,000 people across more than 1,000 mosques and has helped engender support for Doğa Derneği with both local government and the region’s people. Since the project’s inception, local attitudes to the lake and its conservation have improved dramatically and there are already signs that the area’s wildlife is responding positively.