Climate change is impacting the distribution, abundance and migration of Australian birds 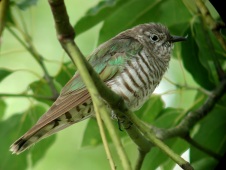 Climate change is already driving significant changes in the phenology, distribution and abundance of Australian birds. Migrants are arriving earlier and departing later, many landbirds have undergone southward range shifts, while seabirds are undergoing dramatic changes in abundance and distribution.

A number of studies have shown that climate change is already driving significant changes in the phenology, distribution and abundance of Australian birds. An analysis of data from south-eastern Australia revealed that on average the first arrival dates of migrants had advanced by 3.5 days per decade since 1960. A trend towards later departure of around 5.1 days per decade was also found, with short- to middle-distance migrants, such as Rufous Whistler Pachycephala rufiventris, now spending significantly longer periods at their breeding grounds (Beaumont et al. 2006).Elsewhere, species have undergone similar phenological shifts. Summer visitors to Western Australia such as Shining Bronze-cuckoo Chrysococcyx lucidus and Rainbow Beeeater Merops ornatus are arriving earlier (Chambers 2005, 2008), while species like White-throated Eared-nightjar Eurostopodus mystacalis, which once moved north during the cooler months, are now overwintering in south-eastern Queensland (Chambers 2007).

Comparisons of Australian bird atlases from 1977–1981 and 1998–2006 reveal that numerous landbirds, such as Pacific Baza Aviceda subcristata and Pied Butcherbird Cracticus nigrogularis, have undergone significant southward range expansions (Silcocks and Sanderson 2007). Many range shifts have been considerable, with some species moving as much as 200–300 km in just two decades (Olsen 2007). Australia’s seabirds are also undergoing dramatic changes in abundance and distribution. Many tropical/sub-tropical seabird colonies, such as those along the Great Barrier Reef, have suffered major declines linked to rising sea temperature and increasingly intense El Nino events. In contrast, many temperate seabird populations, such as those of the Australasian Gannet Morus serrator in the Bass Straits, have experienced considerable increases (Devney and Congdon 2007).

Climate change is likely to have a deleterious impact on many Australian birds. Those species restricted to high elevations and latitudes, such as the Tooth-billed Bowerbird  Scenopoeetes dentirostris which is endemic to high altitude rainforests in the Atherton region of north-east Queensland, are especially susceptible (Olsen 2007). Species that occur on islands or at low-lying coastal sites, such as the Critically Endangered Orange-bellied Parrot Neophema chrysogaster, will be threatened by rising sea levels (Bennett et al. 2007). Climate change is also likely to exacerbate other threats such as habitat loss and invasive species. For example, eucalypt woodlands are threatened by more frequent fires which will facilitate the spread of fire-adapted weeds such as gamba grass Andropogon gayanus which in turn will promote further fires. Modelling shows that this African invasive could become established across much of northern Australian, threatening birds such as the endangered Gouldian Finch Erythrura gouldiae(Low 2007).

Recommended Citation:
BirdLife International (2008) Climate change is impacting the distribution, abundance and migration of Australian birds. Downloaded from http://www.birdlife.org on 20/05/2022