Climate change is driving poleward shifts in the distributions of species 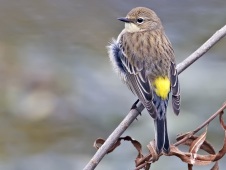 Climate change is expected to result in climatic zones moving poleward and an associated shift in the geographic ranges of bird species. A suite of studies in the northern hemisphere are now demonstrating such distributional shifts. 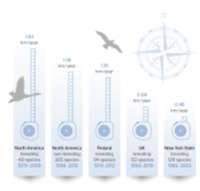 Climate change is expected to result in climatic zones moving poleward and an associated shift in the geographic ranges of bird species. Evidence for such shifts is now becoming apparent. It remains difficult to causally link such distributional shifts specifically to climate change as a wide range of additional factors also influence species distributions. However, thanks to recent research in Europe and North America, a remarkably consistent pattern is emerging that provides compelling evidence that climate change is responsible for significant northward shifts in the distribution of avian communities across the northern hemisphere.

In the UK, Gillings et al. (2015) investigated changes in bird species distribution by comparing two breeding bird atlases (1988–91 and 2008–11). They showed variation in bird responses, but with an overall poleward shift—southern birds had shifted their mean northern range boundary 0.68 km/yr northwards. In contrast, there had been no southward range expansion in northern species, suggesting that climate change and not other factors, such as land-use changes or population growth, was responsible. A study in Scandinavia used a similar method to examine changes in Finnish bird distributions (Virkkala and Lehikoinen 2014). It found that breeding birds in Finland had moved their northern range limit by a similar amount (1.26km/yr). The poleward range expansions revealed in these European studies coincided with the most rapid period of global warming in 10,000 years.

Using data from the American Breeding Bird Survey (BBS), Auer and King (2014) investigated whether a similar pattern had occurred in North America. They found that the northern limit of a subset of birds had shifted 1.84 km year northward. This study however concentrated only on northern latitude boundaries. Data collated by the National Audubon Society on the winter distribution of 305 North American bird species between 1966 and 2013 also found a poleward shift in the centre of abundance of 1.38 km (Environmental Protection Agency 2014).

These results show the overall signal in movement across species, though more recent studies have looked at inter-specific variation in responses. In the UK for example, Gillings et al. (2015) found range extensions in up to 24 directions. Similarly in Australia, multi-directional range shifts were common (Vanderwal et al. 2013). This variation is likely due to complex annual and seasonal variation in both temperature and precipitation, or differing climatic variables influencing species at different life stages.

Taken collectively, these studies provide compelling evidence that climate change has already resulted in significant range shifts in numerous bird species, and overall these shifts are poleward. It seems highly unlikely that such consistent trends, reported across two continents, could be satisfactorily explained by factors other than climate change. Given that to date temperature rises have been relatively modest, these findings suggest that future global warming will result in substantially altered avian communities. Although there are likely to be ‘winners and losers’ amongst bird species, those found in polar regions or at high altitudes are likely to experience significant range contractions as a result of continued rising temperatures. Species with poor dispersal abilities or highly specialised ecological requirements will be particularly at risk.

Recommended Citation:
BirdLife International (2015) Climate change is driving poleward shifts in the distributions of species. Downloaded from http://www.birdlife.org on 07/07/2022