Climate change is being incorporated into conservation spatial planning 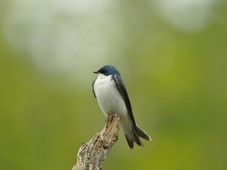 Climate change is beginning to be incorporated into spatial planning and prioritization, but uncertainty about how species will respond to changing climates makes this challenging. One recent study by the National Audubon Society (BirdLife in USA) developed three different approaches to setting spatial priorities depending on assumptions about species’ ability to track shifts in climate or adapt to changing conditions. It also developed a ‘bet-hedging’ prioritization drawing on all three to facilitate efficient conservation investment despite substantial biological uncertainty.
Spatial prioritisation for conserving North American birds, using Tree Swallow as an example, based on modelled climatic suitability and accounting for uncertainty 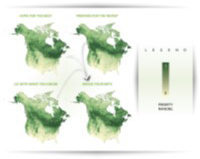 Research shows that species are already responding to climate change (Sources in Pearce-Higgins and Green 2014). Up until now however, temperature changes have been gradual. There is much uncertainty in how well species will respond to the more rapid changes predicted in the next century (IPCC 2014). So far, some species have exhibited enough phenotypic plasticity and adaptive evolution to cope with changes (Charmantier and Gienapp 2014), whilst some have such niche inflexibility that population declines will be likely as the climate continues to change (Frederiksen et al. 2008, Sandvik et al. 2014).
This uncertainty in how different species will respond to future climate change makes spatial prioritisation for conservation difficult. Schuetz and colleagues (2015) attempt to overcome this by quantifying how different assumptions on species biological responses to climate change influence the large scale prioritisation and value of land for conservation.
Using distribution data from the North American breeding bird count and Audubon Christmas bird count, range changes by the end of the century were predicted under three emission scenarios. From this, 314 bird species were identified as losing at least 50% of their current range, and therefore identified as those in need for conservation prioritisation.
Three biological responses to climate change were defined 1) Track and move—species that can expand their ranges as long as suitable climatic space becomes available, 2) Suffer in place—species unable to expand their ranges in response to changes because of either a lack of other resources, species interactions or an inability to disperse or 3) Adapt in place—species that are unable to expand their ranges due for similar reasons as 2), but have high adaptability and phenotypic plasticity that enables persistence in their current range.
Prioritisation approaches varied according to these biological response. For example, prioritisation for ‘Track and move’ individuals would involve aiming to conserve its distribution potential, whilst prioritisation for ‘Suffer in place’ individuals would involve identifying and conserving sites that are likely to remain climatically suitable (climatic refugia). To account for uncertainty in how species will respond, a ‘hedge your bets’ approach was also modelled, incorporating all of the above biological responses.
The combination of all biological responses in a ‘Hedge your bets’ approach tended to be the most efficient method, with median losses in conservation efficiency being consistently lower than other approaches, across both summer and winter ranges. Prioritisation is essential in conservation due to severe lack of funds, making modelling a useful tool in aiding decision making, as it incorporates this high level of uncertainty in how species will respond to climate change.
This case study is taken from ‘The Messengers: What birds tell us about threats from climate change and solutions for nature and people’. To download the report in full click here.