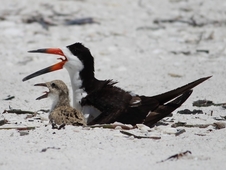 Climate change is predicted to cause range shifts in many bird species, which may compromise the effectiveness of protected areas. Species Distribution Modelling of 941 species of conservation concern across the Caribbean, Central and South America shows widespread shifts in species distributions and declines in species richness under climate change. This would have a substantial impact on species assemblages in current Important Bird and Biodiversity Areas (IBAs, Key Biodiversity Areas identified for birds). The turnover of species within IBAs is predicted to vary spatially across the Neotropics, with some IBAs increasing in conservation value while others decrease. Overall, the IBA network is predicted to remain robust, however dynamic management of IBAs will be necessary to cope with shifting conservation objectives.

The Important Bird and Biodiversity (IBA, Key Biodiversity Areas identified for birds) network in Central and South America, showing turnover in species of conservation concern (i.e. those for which IBAs have been identified) by 2070 under climate change. 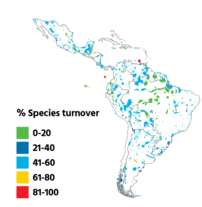 Many bird species are already showing shifts in distribution due to climate change (Chen et al. 2011; Gillings et al. 2015; Lenoir et al. 2020). This has the potential to compromise the effectiveness of the protected areas which were established to conserve them, as these areas tend to have fixed boundaries. As climatic conditions within a protected area change, species assemblages will be subject to change as some species emigrate while others colonise the area. This turnover in species may lead to the area becoming more or less valuable for conservation, depending on the relative rates of emigration and colonization of species of conservation concern.

Species Distribution Models (SDMs) can be used to predict future species ranges under climate change, and can therefore be used to predict the gains and losses of species from certain areas. SDMs have been used to investigate the effects of climate change on Important Bird and Biodiversity Areas (IBAs, Key Biodiversity Areas identified for birds) across the Caribbean, Central and South America (BirdLife International & National Audubon Society, 2017; Voskamp et al., in review). The projected distributions of 941 IBA trigger species (species of conservation concern for which an IBA has been identified) were modelled under different climate change scenarios. These models predict widespread decline in overall bird species richness and the richness of species of concern across South America, with the largest declines in the southern Amazon. The ranges of IBA trigger species are predicted to decrease by an average of 39% and shift by an average of 208 km by 2050. This would have a substantial impact on species assemblages in the current IBA network.

Turnover rates were found to vary significantly throughout Central and Southern America. Many IBAs in the Amazon region are predicted to lose several species of conservation concern and gain few new ones (i.e. to decrease in value). However, many of those around the periphery of the Amazon are predicted to both lose and gain a high number of species, significantly altering their species composition but maintaining their conservation value. IBAs predicted to have a low turnover rate and therefore a relatively stable species composition are mainly located across Central America and in the southern part of South America. While overall climatic suitability is predicted to decrease across the IBA network, some sites are projected to increase in conservation value due to a higher rate of colonization than emigration. For example, Belize, Guatemala and Jamaica have more IBAs projected to become climatically suitable for a larger number of species than IBAs projected to become suitable for fewer species. Protection of these areas may be crucial in facilitating species range shifts under climate change.

Under a medium emission scenario, 93% of IBA trigger species are projected to retain suitable climatic conditions within at least one IBA in which they currently occur, while 65% are projected to retain suitable climate in at least half of IBAs identified for them. The IBA network across Central and South America is therefore predicted to remain robust, however it will need dynamic management. Regular monitoring is needed to identify IBAs increasing in conservation value. The conservation objectives of individual IBAs will need to change over time as species compositions change, and should be considered in the context of the wider IBA network.

Climate Action Plan for the Americas

Recommended Citation:
BirdLife International (2020) Climate change in the Neotropics is predicted to cause range shifts in species for which IBAs have been identified. Downloaded from http://www.birdlife.org on 14/04/2021