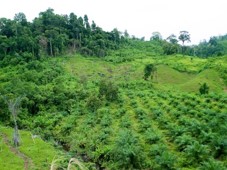 Climate change and deforestation produce double jeopardy for endemic South-East Asian forest birds such as the White-eared Myza Myza sarasinorum, with distributions predicted to decline by 19-42%, and population sizes by 19-62% (2010-2050). Lowland species are projected to be hit hardest by deforestation while climate change is the dominant threat for montane species.

Land conversion and climate change are together two of the greatest threats facing biodiversity. Combined, these threats are predicted to be responsible for the conversion of 25% of natural land by the end of the century, with between 170 and 260 bird species expected to have substantial range contractions (Jetz et al. 2007). Deforestation in tropical regions is known to be a reliable predictor of bird extinction risk (Brooks et al. 1997) and the impacts of both deforestation and climate change are thought to be especially prevalent in humid tropical forests (Asner et al. 2010).

Field data from bird counts at Lore Lindu National Park in Indonesia were combined with global climate and dynamic landscape models to determine the vulnerability of three endemic bird species to these threats both individually and combined by the year 2050 (Harris et al. 2014).

The impacts of climate change was greatest for high elevation endemics, whereas deforestation was the dominant threat for low elevation species. For example, 4% range area declines and 50-61% population declines were predicted for the high elevation White-eared Myza Myza sarasinorum, while deforestation would only cause range declines of less than 4% and population declines of 1-2%. In contrast, mid elevation species are expected to be more exposed to deforestation than the negative impacts of climate change, with range area declines due to habitat loss being 24%, compared to 5% from climate change for Sulphur-bellied Whistler Pachycephala sulfuriventer. When combining these two threats, area range and population loss are amplified, with 19–42% declines in range area and 19–62% declines in population sizes across species.

As deforestation is expected to continue, the ability of endemic birds to adapt to the added pressure of climate change will diminish. Management options should be flexible depending on which threat is hitting which species most, with climate-adaptation strategies being most important for higher elevation species.