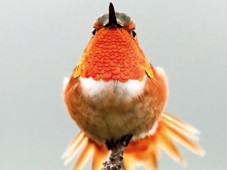 Severe heat waves, which occasionally kill large numbers of birds in hot desert environments, are predicted to increase in intensity, frequency and duration. Hotter temperatures will substantially increase water requirements, particularly for small birds, severely reducing survival rates. This is projected to occur much more frequently by the 2080s, increasing the frequency of catastrophic mortality events. 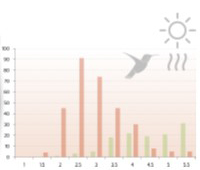 The large majority of climate change research to date focuses on long-term trends in temperature or precipitation with little attention on the change in frequency or intensity of extreme weather events. Extreme events are however predicted to substantially increase in frequency (Solomon et al. 2007), and high levels of drought-associated avian mortality is likely in countries such as Australia (Mckechnie et al. 2012).

Desert birds are particularly vulnerable to extreme heat waves due to their small body size, largely diurnal activity and specific habitats with little temperature variation. Large scale die-offs of birds have been seen in the past, including the death of 208 Short-billed Black Cockatoo Zanda latirostris in response to a two day heat wave in South West Australia (Saunders et al. 2011).

To determine the influence of climate change on droughts and avian survival times, the water requirements and survival times of 27 desert bird species found in Yuma, USA and Queensland, Australia were modelled for current temperatures and those predicted for the 2080s (McKechnie and Wolf 2010). Water requirements were modelled for the hottest part of the day (12-6pm) and survival times estimated as the time taken for cumulative evaporative water loss to exceed a realistic dehydration threshold.

As would be expected, avian water requirements were substantially higher in the 2080s compared to current conditions, with survival times being reduced for birds of smaller body mass. This is because water loss occurs at decreasing rates with increasing body mass, making it harder for smaller birds to cope with rising temperatures.

These results are of importance because large scale die-offs are likely to influence the stability of populations. As well as the effects of direct mortality, sub-lethal effects could also include reduced reproductive success (McCreedy and van Riper 2015), potentially resulting in population declines.

This case study is taken from ‘The Messengers: What birds tell us about threats from climate change and slutions for nature and people’. To download the report in full click here.