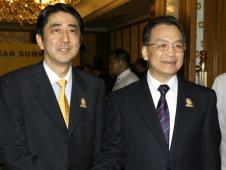 Collaboration between China and Japan is helping to save one of the region’s rarest and most threatened birds—the Crested Ibis. Through captive breeding and release, in combination with other measures, the population has increased form a handful of individuals to over 500 birds in the wild. The two nations’ commitment to the species was recently highlighted by the historic meeting of the countries’ Prime Ministers to discuss the ongoing conservation effort.

In 2007, the Prime Ministers of China and Japan came together to discuss the fate of one of Asia’s flagship birds: the Asian Crested Ibis Nipponia nippon (Chikatsuji 2007). The historic meeting, which took place at the Association of South-East Asian Nations (ASEAN) conference in the Philippines, may prove to be a critical step towards safeguarding the future of one of the region’s most threatened species.

By 1982, the Asian Crested Ibis, which had once bred in Russia, Japan and China, appeared close to extinction, having declined owing to changing agricultural practices, pollution, and hunting. Just five wild individuals were thought to persist in Japan and the decision was taken to place these in captivity. However, in May of the same year, seven birds were rediscovered in Shaanxi province, central China. Since this time, a concerted effort by the Chinese Government and local people has resulted in a steady population increase. By June 2002, the population numbered 140 birds and today there are believed to be over 500 in the wild (Unshan 2007, BirdLife International 2008).

As a result of these efforts, the species is no longer listed as Critically Endangered, yet numerous threats remain for the tiny population. Captive breeding and the reintroduction of the species within its former range are crucial to its long-term survival. Both China and Japan maintain successful breeding programmes, and the two nations are now working towards the re-establishment of wild populations. China has donated a number of ibises to its neighbour, and there are currently plans to reintroduce the birds to Sado Island in Japan (Chikatsuji 2007). Given that the future of the species depends on effective collaboration between China and Japan, the meeting of the two Prime Ministers is highly significant and underlines the two nations’ commitment to the conservation of the Asian Crested Ibis.