The EU has lost 560-620 million native breeding birds since 1980, representing a loss of 17-19%. Patterns of loss vary between species according to their abundance, habitat and other aspects of their ecology. The largest declines have occurred in common and abundant species, those associated with agricultural and grassland habitats, long-distance migrants and shorebirds. The loss of abundant species may impact ecosystem function and the delivery of ecosystem services. However, the rate of population decline appears to have slowed since 2000, suggesting that conservation actions to protect species and restore habitats may be helping to slow and reverse population trends. 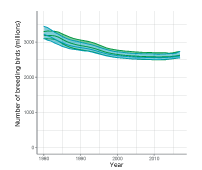 Total species abundance is a key indicator of biodiversity change. In general, higher abundance is associated with greater ecosystem service provision – a larger bird population may consume more insect pests, disperse more seeds, and may even be associated with better mental health (Cox et al. 2017). Changes in the abundance of common and abundant bird species are likely to have a disproportionate effect on the provision of these ecosystem services, as even small proportional declines in their population will result in large losses of individuals.

Burns et al. (2021) used data from the Pan-European Common Bird Monitoring Scheme and from reports by EU Member States to the European Commission under the Birds Directive to estimate changes in the total population size of 378 native breeding bird species in the EU. They estimated a total loss of 560-620 million birds between 1980 and 2017, representing an overall decline in abundance of 17-19% (Figure 1).

Figure 2: Percentage change in total abundance of 378 native breeding bird species in the EU from 1980 to 2017, split by a. abundance category and b. habitat. Error bars represent 95% credible intervals.

Patterns of loss varied between species according to their abundance class, habitat and other aspects of their ecology. Common and abundant species suffered greater declines in abundance (-25% and -17% respectively) compared to rare and scarce species (-4% and -5% respectively) (Figure 2a). Considering particular habitats, losses were greatest for species associated with agricultural land and grassland (-33%), as well as tundra, mire and moorland (-28%) (Figure 2b). There was also some evidence that long-distance migrants had suffered a greater proportional decline (-33%) than resident species (-21%). Among bird groups, shorebirds showed the largest proportional decline (-38%), while waterfowl showed an increase (+23%).

A small number of species was responsible for a large proportion of the change in total abundance. House Sparrow Passer domesticus, Western Yellow Wagtail Motacilla flava and Common Starling Sturnus vulgaris together accounted for 46% of the total decrease across all declining species, while Eurasian Blackcap Sylvia atricapilla, Common Chiffchaff Phylloscopus collybita and Eurasian Blackbird Turdus merula accounted for 33% of the increase across increasing species (Figure 3).

However, the results also suggested a slowing of the decline since the turn of the century, with much of the loss in abundance occurring in the 1980s and 1990s (Figure 1). This change may be driven in part by conservation actions to protect species and create and restore habitats. As these conservation efforts are often aimed towards rarer species, this may explain why common species tend to have declined at a greater rate.

Results from this study are similar to those described in North America, where an estimated 2.9 billion birds have been lost since 1970, representing a decline of 29% in breeding bird abundance (Rosenberg et al. 2019). Both studies also identified grassland/farmland birds, shorebirds and long-distance migrants as suffering the greatest declines, highlighting the urgent need for greater conservation efforts directed towards these birds.