Birds in some regions, notably Oceania and Asia, have deteriorated in status faster than others 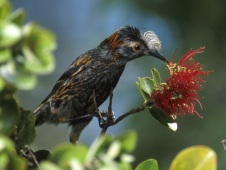 Birds have deteriorated in status in all parts of the world, but trends in some biogeographic realms are particularly worrying. Birds in the Oceanic realm are substantially more threatened on average and have declined fastest, while those in the Indomalayan realm underwent a sharp decline in the 1990s owing to intensifying destruction of Indonesian forests.

The Red List Index (RLI) for birds (Butchart et al. 2004, 2005, 2007) can be broken down by biogeographic realm to compare trends in different parts of the world. The results show that species have deteriorated in status in all regions, but there are some clear regional variations. Birds in the Oceanic realm are substantially more threatened on average (with lower RLI values) and have declined fastest, often owing to the detrimental impacts of invasive alien species on Pacific islands. In the Indomalayan realm, there was a sharp decline in the status of birds in the 1990s. This was a result of the intensifying destruction of forests in the Sundaic lowlands of Indonesia, which escalated particularly in the late 1990s. Such large-scale habitat loss has obvious implications for the extinction risk of the many bird species that are largely restricted to these forests.

Interpreting the RLI
An RLI value of 1.0 equates to all species being categorised as Least Concern, and hence that none are expected to go extinct in the near future. An RLI value of zero indicates that all species have gone Extinct. Species are included in the calculations for all biogeographic realms in which they occur regularly, but status changes driving RLI trends are assigned only to the realm(s) in which the processes driving them occurred.

Measuring Global Trends in the Status of Biodiversity: Red List Indices for Birds
Improvements to the Red List Index
The IUCN Red List of Threatened Species

Recommended Citation:
BirdLife International (2013) Birds in some regions, notably Oceania and Asia, have deteriorated in status faster than others. Downloaded from http://www.birdlife.org on 31/01/2023

Key message: Trends in some regions and habitats are of particular concern
Case studies