Birds in some families, notably seabirds, have deteriorated in status faster than others 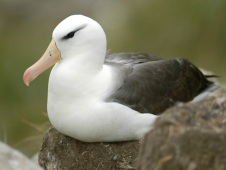 Red List Indices for particular species groups show that declines have occurred across many families of birds. Seabirds that use the open seas are particularly threatened, and have deteriorated in status fastest over the last two decades.

Some species-groups have been impacted particularly seriously by human activities and have an exceptionally high proportion of species listed as globally threatened. The Red List Index (RLI; Butchart et al. 2004, 2005, 2007) can be disaggregated to show trends for species in different families that are of particular conservation interest. This shows that pelagic seabirds (those using the open seas) have been impacted particularly seriously by human activities, being substantially more threatened on average (with lower RLI values) and deteriorating in status fastest over the last two decades. This is closely linked to the expansion of commercial longline fisheries, which causes incidental mortality of albatrosses and other seabirds, combined with the impacts of invasive alien species at seabird nesting colonies.

Interpreting the RLI
An RLI value of 1.0 equates to all species being categorised as Least Concern, and hence that none are expected to go extinct in the near future. An RLI value of zero indicates that all species have gone Extinct.

Measuring Global Trends in the Status of Biodiversity: Red List Indices for Birds
Improvements to the Red List Index
The IUCN Red List of Threatened Species

Recommended Citation:
BirdLife International (2013) Birds in some families, notably seabirds, have deteriorated in status faster than others. Downloaded from http://www.birdlife.org on 20/05/2022

Key message: Trends in some regions and habitats are of particular concern
Case studies