Birds have huge popular appeal, and the amount of information about them is impressive 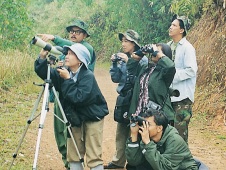 Watching birds is tremendously popular. For example, c.46 million people in the United States (around one in five) spend time observing and identifying birds (USFWS 2003), and 20 million people (around one in three) in the United Kingdom are birdwatchers or regularly feed birds in their gardens (www.fatbirder.com). In 2001, the month-long World Bird Festival organised by the BirdLife Partnership attracted well over 300,000 people to more than 1,450 birding and cultural events in 88 different countries across the world, with three million bird sightings being logged in Europe alone.

Scientific research on birds is intensive, and increasing. Between 1981 and 2002, there were 13,123 articles in mainstream academic journals with the word ‘bird’ in the title or abstract, c.600 a year on average—in 2003, there were 1,411 (‘Web of science’ keyword search)! Many birdwatchers are skilled observers, and able to contribute high quality data. Information on breeding and non-breeding bird distribution, migration, ecology and behaviour is collected from all over the world, through the hard work of thousands of individuals and organisations. For example, The Atlas of Southern African Birds involved 7.3 million records collected by 5,000 observers (Harrison et al. 1997). In many countries, data on migration and longevity are gathered through extensive bird-ringing programmes. In the UK alone over 900,000 birds are ringed each year (www.bto.org). Population surveys such as the Breeding Bird Survey (BBS) of North America provide up-to-date information on bird populations and trends: over 5,000 routes are surveyed annually, each with 50 counts (Sauer et al. 2011).

Popular interest in birds is reflected in the sheer volume of articles, field guides and other books that have been published about them. In 2004, the largest natural history book distributor was marketing 3.5 times more books about birds than about mammals. There are guides to bird identification covering the entire globe, with individual guides produced for the majority of countries, and many others that focus on particular groups of birds. A literature survey of the birdlife of Australasia and Oceania alone reveals over 4,600 books and reports (Simpson 1995).

This huge array of information is also being brought together in a meaningful way for conservation. Since 1980, BirdLife International (and its precursor the International Council for Bird Preservation) has published Red Data Books, presenting comprehensive information on all globally threatened bird species. The latest in this series, Threatened Birds of Asia, cites over 7,000 references. BirdLife’s World Bird Database (WBDB), initiated in 1994, manages extensive information on some 10,000 species (including 1,253 threatened bird species), over 10,000 Important Bird Areas (IBAs) and 218 Endemic Bird Areas (EBAs).

Recommended Citation:
BirdLife International (2012) Birds have huge popular appeal, and the amount of information about them is impressive. Downloaded from http://www.birdlife.org on 08/08/2022