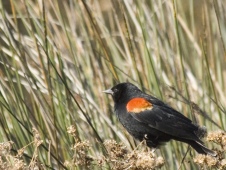 Studies show that birds provide biological control services worth millions of dollars in farmlands and forests, and are encouraged in some plantations through the provision of nest-boxes

In the Sacramento Valley, California, Western Meadowlarks Sturnella neglecta were reckoned to require 193 tons of insects daily during the breeding season, and in an area north-west of Wichita, Kansas, some 15–20 million Red-winged Blackbirds Agelaius phoeniceus were estimated to have fed their young, from hatching to independence, the equivalent of 4,260 tonnes of insects or 6.3 billion cutworms (moth larvae notoriously harmful to plants) (Henderson 1927). All the birds of Texas were conservatively estimated to consume around 35,500 “bushels” (1.25 million litres) of insects a day (Henderson 1927). During outbreaks of western spruce budworm Choristoneura occidentalis birds, in particular the Evening Grosbeak Coccothraustes vespertinus, provide biological control services worth, in 1980s value, $1,820 per square kilometre (Diamond 1986).

In 1921 it was estimated that insects annually destroyed one billion dollars’ worth of forest and agricultural products in the USA, and that without the services of the birds that cost would have risen by another US$444 million. Eighty years ago the birds were thus saving the US farmland and forest economy 28% of its losses (Henderson 1927).The economic value of coffee berry borer Hypothenemus hampei predating birds in an 18 hectare Jamaican coffee plantation was estimated to be US$310 ha1 for the harvest season of 2006 (Johnson et al. 2010).

Across Europe and northern Asia the same considerations apply. The European Pied Flycatcher Ficedula hypoleuca, for example, is a major suppressor of insects harmful to forest vegetation, taking many pest insects, especially moths and caterpillars, and is often catered for in plantations and economically important stands of oak trees through the provision of nest-boxes.The presence of breeding great tits has also been shown to reduce apple orchard pest damage by 50% (Mols & Visser 2007), making the use of nest-boxes a fairly standard management tool in forests throughout Europe.

Similarly in Africa, bird exclusion experiments in small holder farms demonstrates the use of birds in reducing the damage of pests on a major crop in the Kenyan highland agroecosystem. In the dry season, kale leaf damage by aphids was considerably higher on bird excluded plants, highlighting their importance economically and ecologically (Ndang’ang et al. 2013).