Birds are found almost everywhere in the world, from the poles to the equator 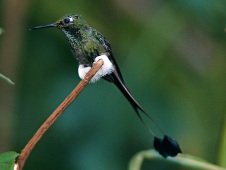 Booted Racket-tail—one of c.337 species of hummingbirds found only in the New World—occurs in the subtropical and temperate forests of the Andes. © Keith Barnes/Tropical Birding

Birds occur on land, sea and freshwater, and in virtually every habitat, from the lowest deserts to the highest mountains. Our knowledge of bird species can tell us a great deal about the state of the world and wider biodiversity. Patterns of bird diversity are driven by fundamental biogeographic factors, with tropical countries (especially in South America) supporting the highest species richness.

Distribution of the world’s bird species: based on overlying the breeding and wintering ranges of all known bird species

A worldwide total of over 10,000 different species of birds are recognised by BirdLife International, the majority (c.80%) occurring in continental regions, the remainder on islands. Birds occupy a huge variety of habitats and are found at the extremes of latitude and land elevation. This great diversity of land-, water- and seabird species is distributed across the world, and some of the smallest nations have rich bird faunas. Birds are important components of the world’s ecosystems, so the state of the world’s birds tells us a lot about the state of the environment.

However, the distribution of birds is uneven: the different biogeographic realms vary substantially in terms of the numbers and types of bird species they hold (see map). By far the richest is the Neotropical realm, which holds c.36% of all known landbird species. This is followed by the Afrotropical (c.21%), Indomalayan (c.18%), Australasian (c.17%), and then the Palearctic (c.10%), Nearctic (c.8%) and Oceanic (c.2%) realms. Although they have relatively few species in total, the Pacific islands in the Oceanic region are unusually rich for their size; together they hold 20 times more species per unit area than South America, the richest of the continents (Newton 2003). Country by country, the richest territories for avian diversity are Colombia, Peru, Brazil, Ecuador and Indonesia (each with more than 1,500 species), followed by Bolivia, Venezuela, China, India, the Democratic Republic of Congo, Mexico, Tanzania, Kenya and Argentina (all around 1,000 or more; BirdLife International unpublished data).

There is much debate over what factors have been important in driving global patterns in biological diversity. The existence of big geographic differences in bird species diversity is thought to result from the differing conditions experienced over evolutionary time. Particularly influential is the variety (and area) of different habitats present. Tropical forests are especially rich in species; hence the particularly high avian diversity found in the equatorial regions. Other major influences include physical barriers such as impassable oceans and mountain ranges, climatic events such as the recent glacial cycles, biotic constraints such as natural enemies and competing species and, more recently, expanding and pervasive human impacts. The distributions of other taxa are less well-known than those of birds, but they are also determined by these fundamental biogeographic factors. This makes birds a useful starting point for mapping broad-scale patterns in species richness and endemism.

Newton, I. (2003) The speciation and biogeography of birds. London, Academic Press.

Recommended Citation:
BirdLife International (2013) Birds are found almost everywhere in the world, from the poles to the equator. Downloaded from http://www.birdlife.org on 23/01/2022