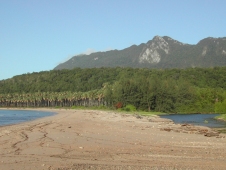 The area of Timor-Leste richest in biodiversity contains three IBAs; these were linked and protected in 2007 by the creation of the country’s first national park, Nino Konis Santana National Park.

Timor-Leste (East Timor) became an independent country in 2002. Amid strong pressures for rapid economic development, its government and people have shown an exceptional and exemplary commitment to maintaining their natural and cultural riches. Protection of the environment, preservation of natural resources and safeguarding of sustainable livelihoods are guaranteed under the Constitution, and backed by strong regulations, such as a total ban on commercial logging since the year 2000. As part of its sustainable development strategy, the government has embarked upon a programme to establish and manage a network of Protected Areas. BirdLife’s work on Important Bird Areas (IBAs) has been critical to the early success of the programme (Trainor et al. 2007; see also Langley 2008).

Priority sites for conservation in Timor-Leste have been tentatively identified on several occasions, and legal protection was provided to 15 sites in 2000. However, the sites were protected only on paper, and not managed as protected areas: boundaries were not defined and the sites are not necessarily recognised in land-use planning. It was only with the IBA surveys in 2002–2006 that sites were systematically evaluated, and the extreme eastern end of the country was confirmed to be of exceptional importance, including pristine beaches, lowland and montane forest of several types, and unique wetlands (see figure).

In 2007, the Government of Timor-Leste declared its first national park—the Nino Konis Santana National Park—covering 123,600 hectares, and linking three IBAs: Lore, Mount Paitchau and Lake Iralalaro, and Jaco Island. The park boundary extends into the marine area, which holds magnificent coral reefs characteristic of the “Coral Triangle”. Furthermore, the park is of enormous cultural significance, with numerous sacred sites, and was a key stronghold for resistance fighters during the pre-independence period of occupation of Timor-Leste; the Park takes its name from one of the resistance heroes.

It is not unusual for IBAs to be of cultural significance, typically because the rich natural resources they hold have enabled the development of strong human societies. In protecting this region, the Government of Timor-Leste has shown its commitment to conservation in line with sustaining the livelihoods and heritage of local people. Identification of IBAs has helped to provide a rigorous justification for this decision, and is now helping to identify the next sites for protection in what will become the new country’s Protected Areas Network.