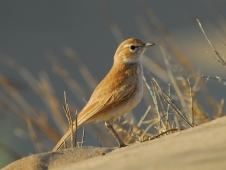 Although many African Important Bird and Biodiversity Areas (IBAs) are likely to experience high species turnover as a consequence of climate change, it is nevertheless projected that c.90% of priority species will retain suitable climate in one or more IBAs where they occur; only 6–8 species are projected to lose all suitable climate space from the IBA network by the end of the 21st century. These results demonstrate that safeguarding the existing network of IBAs, in conjunction with adaptation measures and the identification of additional sites, will play a key role in mitigating the worst impacts of climate change on birds. 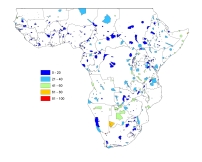 Ensemble species turnover for each individual IBA is calculated as the mean turnover across three future climate scenarios (HadCM3, ECHAM4 and GFDL-R30) for 2085, in comparison to the present. Absolute percentage turnover for each IBA is placed into one of five classes, with warmer colours representing higher projected turnover (n = 803 IBAs; 1,608 species). Sub-Saharan Africa is defined as south of 200N (Hole et al. 2009). Source: Hole et al. (2009) and Hole et al. (2011)

The shifts in species’ ranges that will result from climate change pose substantial challenges for protected area systems that were designed based on a static view of biodiversity. Recent research has assessed how the range changes for threatened, restricted-range and biome-restricted species in Africa will affect the ability of the African network of Important Bird and Biodiversity Areas (IBAs) to conserve these species. Hole et al. (2009) modelled the future potential ranges (at different time points during the 21st century) of all the species for which the IBAs were designated. They found that there is likely to be substantial turnover of these ‘priority species’ (up to 100% within individual IBAs) in certain regions by 2085. However, persistence of suitable climate space across the IBA network as a whole is remarkably high: 88–92% of priority species are projected to retain suitable climate in one or more IBAs in which they are currently found, and only 6–8 species are projected to lose all suitable climate space from the IBA network by the end of the century. Hence, while some IBAs may lose many or all of the species for which they were identified, they will become important for other priority species.

These findings could assist in developing a management framework for IBAs in the region to combat climate change, and can inform general principles and guidelines for adaptive management strategies. Building on this research, Hole et al. (2011) identify five broad management scenarios for the sub-Saharan African IBA network based on the proportion of ‘priority species’ within each IBA projected to emigrate, colonise or persist in the face of climate change. The most common management prescriptions will continue to provide appropriate conditions for those species for which the sites were originally designated. They will, however, also need to maintain, for as long as possible, suitable conditions for those species predicted to emigrate, whilst simultaneously providing sufficient habitat for the high number of projected colonists. Achieving these, potentially conflicting, goals may necessitate the expansion of some IBAs into adjacent areas of natural or semi-natural habitat.

Management scenarios for African IBAs, based on the turnover of species projected under climate change 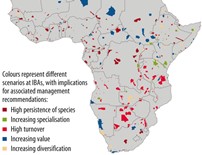 Although the relative conservation value of individual sites may change, these results demonstrate that safeguarding the existing network of IBAs, in conjunction with adaptation measures and the identification of additional sites, will play a key role in mitigating the worst impacts of climate change on birds.