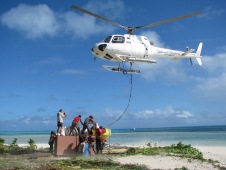 Invasive alien species have been the most important driver of documented bird extinctions—implicated in the disappearance of more than 70 species since 1500. The problem is especially acute on islands, where endemic landbirds and breeding seabirds often lack adequate defences against introduced predators such as rats and cats. Over the last two decades, however, there have been considerable advances in eradication techniques, and a number of recent and current island restoration projects attest to the dramatic success that can be achieved given sufficient resources and political will.

One of the first large-scale, island-wide eradication projects took place on Campbell Island, 700 km south of the New Zealand mainland. Here, introduced brown rats Rattus norvegicus had devastated native wildlife and pushed the endemic Campbell Islands Teal Anas nesiotis to the brink of extinction. The size (c.113 km2), topography and remoteness of the island presented a considerable challenge to effective eradication. However, in 2001, a team from the New Zealand Department of Conservation, equipped with four helicopters, successfully transported and spread 120 tonnes of rodenticide-laced bait across the island. With rats eliminated, native bird species have recolonised and the Campbell Islands Teal has been reintroduced. The success of the project established a model for rodent eradication that has since been replicated around the world.

Beginning in 2006 with the eradication of rats from the small Fijian island of Vatuira, the BirdLife Pacific Partnership has rid 18 islands across Fiji, French Polynesia, New Caledonia and Palau of invasive rodents. Further eradications are planned for islands in French Polynesia, Palau, and the Cook Islands, whilst control measures are being developed for introduced pigs and deer in New Caledonia and non-native green iguana Iguana iguana, small asian mongoose Herpestes javanicus and brown tree snake Boiga irregularis in Fiji. Elsewhere in the Pacific, a ground-breaking project has seen rat eradication successfully implemented on Henderson Island, one of the most remote places on the planet. The island is home to large numbers of seabirds, including several gadfly petrel species, most notably the endemic and Endangered Henderson Petrel Pterodroma atrata.

At Macquarie Island in the sub-Antarctic, the Australian Government has recently funded the eradication of a suite of introduced mammals. The 128 km2 island ecosystem—home to around 3.5 million seabirds—was being degraded by the activities of invasive rabbits, rats and mice. Prior to a helicopter baiting operation—which saw approximately 300 tonnes of bait dropped across the island in June/July 2011—Rabbit Haemorrhagic Disease Virus (RHDV) or calicivirus, was released at key sites of high rabbit density. This drastically reduced rabbit numbers, ensuring that more bait-pellets were available to the rats and mice and that fewer poisoned carcasses remained which could cause mortality among scavenging seabirds. Following the operation, teams of hunters with specially trained dogs are searching the island for any sign of surviving rabbits. Although it is too early to know if the project has been a success, early indications are encouraging, with no subsequent sign of rodents and any remaining rabbits being systematically eliminated.

Perhaps the most ambitious eradication project to date is currently underway on the Antarctic island of South Georgia. With a surface area of 3,755 km2, South Georgia is more than seven times larger than any island where rodent eradication has previously been attempted. The restoration project is only possible because a number of large glaciers divide the island into smaller, manageable units. However, as a result of global warming, these glacial barriers are retreating, and it is now a race against time to complete the project. The first (of three) phases of eradication took place in March 2011, when 12,800 hectares (12% of the total) were treated. By February 2012 there had been no sign of rats and susceptible bird species were breeding freely in the area. The next phase is scheduled for 2013.

As techniques and materials continue to improve, it is likely that many more island restoration projects will become feasible in the coming years. Consequently, BirdLife International is working with Island Conservation, the University of California, Santa Cruz and a number of other organisations to compile a global list of the sites that most urgently require invasive species eradication. For seabirds, an agreed list of nearly 80 sites in 21 countries has recently been published in a major review (Croxall et al. 2012). One island with very high priority is Gough in the southern Atlantic. Here, introduced house mice Mus musculus have devastated seabird populations that include the Critically Endangered Tristan Albatross Diomedea dabbenena and the Endangered Atlantic Petrel Pterodroma incerta and severely threaten endemic landbirds and invertebrates. A feasibility study has already been carried out, and it is hoped that a full-scale eradication will be possible in the next few years.