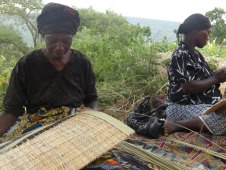 The Nyabarongo wetlands IBA is a series of marshes in the flood-plain of the Nyabarongo river, the longest river in Rwanda. The area supports important populations of Papyrus Yellow Warbler Chloropeta gracilirostris (VU) and Papyrus Gonolek Laniarius mufumbiri (NT) and is within the non-breeding range of the Endangered Madagascar Pond-heron Aldeora idea.

The wetlands were being exploited unsustainably, leading to environmental degradation and increased poverty. Working with the local community, the Association pour la Conservation de la Nature au Rwanda (ACNR), the BirdLife Partner in Rwanda, has supported the development of a local cooperative, CEDINYA. By building the capacity of this institution, helping them to defend their resources against illegal use by outsiders, raising awareness of relevant legislation, providing training in the production of high quality products made from materials harvested from the wetland, and helping to provide access to new markets, the project has benefitted both biodiversity and the local community.

Before the CEDINYA Cooperative was set up, the community had formed a Site Support Group called the Inyange Club. This was a simple association without any legal status. The Rwandan government encourages the formation of cooperatives as a mechanism for development and poverty alleviation, and ACNR helped the community to use Rwandan law to establish the CEDINYA Cooperative as a formal association with a constitution and a bank account, which is registered at district level.

The CEDINYA Cooperative, which includes all the wetland users from the local communities, now sets sustainable targets for harvesting of wetland resources. Members have been trained to rotate their harvesting plots, allowing the papyrus to regenerate; previous studies have shown that papyrus can be harvested three times a year using this method. The project provided training to 100 villagers (45 men and 55 women), producing a variety of handicrafts including baskets, plates and ceiling panels from papyrus and other wetland materials. Although some basket weaving was carried out before the project, products were generally of poor quality and fetched only low prices in local markets. With the support of ACNR, which lobbied local government and other agencies, the CEDINYA Cooperative was able to expand its markets to include the town of Rwamagana and handicraft shops in the city of Kigali. The better quality baskets were able to command prices of up to $10.

Using the income from handicraft sales, the cooperative members were able to get loans to invest in other activities for livelihood improvement, such as school fees, health insurance, better livestock keeping and agricultural improvements. Since the cooperative was established, women and children have spent much less time gathering fuel wood from the wetlands. The women have used this time instead for income generation activities, such as weaving, while the children have been able to attend school more regularly. The Inyange Site Support Group, and subsequently the CEDINYA Cooperative, were fully involved in project planning, implementation and monitoring, and played a key role by providing the facilities for training. The income from handicraft sales means that they are no longer dependent on external funding, and members have now taken full charge of the cooperative’s activities. Those who have been trained in managing the cooperative, in natural resource management, and in handicraft production, are training others in turn. The success of the project is encouraging people from the wider community to join the cooperative.

The involvement of local government at district level has enabled the project to be integrated into government policies for poverty reduction and natural resource management, such as the Economic Development and Poverty Reduction Strategy. In 2008, CEDINYA members reported two cases of poaching of Sitatunga antelopes Tragelaphus spekii, and in collaboration with the local authority and ACNR, the poachers were arrested and reported to the police. No poaching cases were reported in the following year. Reed-burning activities during the dry season have also diminished considerably since the cooperative has been operating in the area. The reduction in pressure on the wetlands has significantly and directly contributed to the conservation of threatened species. Most notably, the Vulnerable Grey Crowned-crane Balearica regulorum, which had disappeared from the area after being illegally hunted for meat and for private collections, has now returned to the marshes.