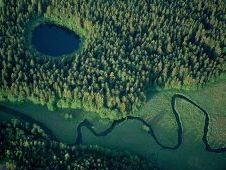 The decision by the Polish government in 2009 to abandon controversial plans for a road development through the Rospuda Valley marked the end of a long, hard-fought campaign to save one of Europe’s last great wildernesses. The campaign, orchestrated by local environmentalists including the Polish Society for the Protection of the Birds (OTOP/BirdLife in Poland), set an important legal precedent and won international plaudits for those involved.

The Rospuda Valley in north-eastern Poland is one of Europe’s last remaining wildernesses. An area of ancient peat bogs, wetlands and pristine primeval forest, it provides an important refuge for species such as lynx Lynx lynx, wolf Canis lupus and beaver Castor fiber. The region is home to a rich avifauna, including several Species of European Conservation Concern (SPECs), among them White-tailed Eagle Haliaeetus albicilla, Common Crane Grus grus and Corncrake Crex crex. In the 1990s, the future of this vital ecosystem was thrown into doubt by plans for a controversial new express road. Since this time, the Rospuda Valley has been at the centre of an energetic, and ultimately successful, public campaign to halt this damaging development.

Highway E67 links Prague in the Czech Republic with Helsinki in Finland. The section between Warsaw and Tallinn, which passes through Poland, Lithuania, Latvia, and Estonia, is known as the Via Baltica. In 1996, developers announced ambitious plans to convert part of this route into an expressway as part of the EU’s Trans-European Transport Network (TEN-T). These plans included the construction of a bypass around the town of Augustów in north-eastern Poland that would pass directly through the wetlands of the Rospuda Valley. From the outset the proposed Via Baltica Expressway generated considerable public outcry and galvanized a coalition of local environmental campaigners and NGOs, key amongst them the Polish Society for the Protection of the Birds (OTOP/BirdLife in Poland). A vigorous campaign was launched to raise awareness of the threats facing the Rospuda Valley and, before long, thousands of people across Poland were wearing green ribbons to show their support.

As part of its accession to the EU in 2004, Poland, like all Member States, was required to designate its most important wildlife sites as protected areas, as part of the European Natura 2000 Network. The Rospuda Valley was listed as one of these sites. Under European law, countries are legally obligated to protect Natura 2000 sites and, whenever possible, find alternatives to any developments that threaten their ecological integrity. Despite these clear legal imperatives and the strength of public outcry, the Polish authorities persisted with their plans to route the new Via Baltica Expressway through the Rospuda Valley. In 2006, the coalition of Polish NGOs, led by OTOP’s Małgorzata Górska and supported by the RSPB (BirdLife in the UK), submitted a complaint to the European Commission and petitioned the European Parliament on the grounds that the project would violate EU nature laws. When the European Commission (EC) was unable to resolve the situation through informal contact with the Polish government, the case was put before the European Court of Justice. Pressure on the Polish authorities intensified in 2008 when the country’s courts ruled that the project violated national laws and that environmental consent for the project should not have been granted.

The Polish government finally announced in March 2009 that the Via Baltica Expressway would not be built through the Rospuda Valley. Later that year, the government agreed to halt construction of the expressway through all Natura 2000 sites in the region: at Biebrza Marshes, Augustów Primeval Forest and Knyszyn Primeval Forest. Finally, it has been agreed that the future development of the road will follow the recommendations made by experts and the findings of a Strategic Environmental Assessment.

This successful campaign has set an important legal precedent that will hopefully prevent similarly damaging projects from being considered elsewhere in Europe. In 2010, Małgorzata Górska was rewarded for her role in the campaign with the prestigous Goldman Environmental Prize—the world’s largest prize honouring grassroots environmentalists.