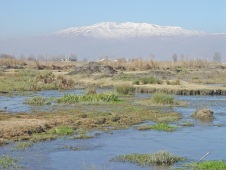 The revival of the hima system at the Kfar Zabad marshlands in the Bekaa Valley, Lebanon, is empowering communities to take responsibility for managing local resources. This approach is being championed by the Society for Protection of Nature in Lebanon (BirdLife in Lebanon) as a part of their Important Bird Areas programme, and is helping to build capacity for local economic enterprises, linked to the wildlife and landscape.

Birdlife International in the Middle East is reviving the hima, a traditional system under which communities manage natural areas such as woodlands, grasslands and wetlands, and protect them from over-exploitation (Dakdouk 2007, SPNL 2008). Dating back at least to the sixth century, the hima system began to decline with modern changes in land use and transport, and changes in use and dependence on natural resources. A feature of the system is its flexibility, with regulations, management and responsibilities determined at a local level according to local needs and priorities. Therefore the hima system allows a mixture of strict protection and sustainable use, and in many places this has supported the preservation of biodiversity that has been lost from the wider landscape.

This hima system is being championed by the Society for Protection of Nature in Lebanon (SPNL: BirdLife in Lebanon) as a part of their Important Bird Areas programme. SPNL believes that with its roots in traditional practice and Islamic law, as well as its greater recognition of the needs and rights of local people, the hima will be more acceptable and effective than centralised protected area systems. The limited ownership of the local communities within the current centralized system of protected areas has resulted in limited benefit sharing with local community groups. SPNL, therefore, is hoping to gain stronger support for the hima practice as a viable and sustainable alternative to nationally designated protected areas. The increased involvement of local communities and the benefits derived from protection will ultimately result in improved status of the natural resources themselves.

One place where the hima system is being revived is at Kfar Zabad in the Bekaa Valley. Kfar Zabad wetland is a small marshland on the level plain of the Bekaa Valley (part of the Syrian–African Great Rift Valley) which is on the main migration route for African–Eurasian waterbirds through the Near East. The marshes are surrounded by steep, dry mountain slopes to the east and by agricultural land in other directions. Several globally and regionally threatened bird species have been recorded, such as Black Stork Ciconia nigra, Great Snipe Gallinago media and Syrian Serin Serinus syriacus, and the site consequently qualifies as an Important Bird Area. When SPNL started working at Kfar Zabad the wetland was under pressure from drainage, intense shooting, uncontrolled grazing, dumping of garbage, and the mis-use and overuse of agrochemicals. Working in collaboration with the local community, SPNL has helped to revise the hima system, and to involve the local community as stewards and beneficiaries of improved environmental management. A representative local management committee, and a site support group have been established, the key threats have been addressed, a visitor centre has been established and local incomes and employment have been created through tour guiding, provision of ‘bed and breakfast’ accommodation, and manufacture and sale of local produce (jams and pickles for example).