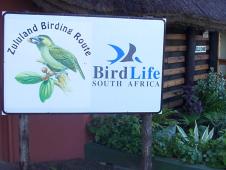 In South Africa, the development of bird-based ecotourism initiatives along ‘birding routes’ has contributed to the conservation of Important Bird Areas and other sites of biodiversity importance. The programme facilitates linkages between local communities, businesses and tourism infrastructure networks, and supports sustainable livelihoods directly through bird guide-training.

Zululand consists of a mosaic of natural habitats, including coastal dune forest, scarp and riparian forests, savanna, wetlands, grasslands and estuarine systems, within a landscape of intensive agricultural and forestry monocultures. This diversity of habitats support some 600 bird species including 45 species found in South Africa’s Red Data Book. With no less than 24 species regarded as national rarities and 16 ‘Zululand Specials’, the area is one of the premier birding locations in South Africa. However, significant action is needed to address continuing habitat loss, degradation and fragmentation. Rio Tinto together with its local subsidiary business, Richards Bay Minerals, and BirdLife South Africa recognised that bird-based ecotourism (avitourism) could achieve real conservation goals in the face of rapid coastal industrial development, as well as provide self-sustaining employment for local communities.

In 2001, the Richards Bay Avitourism Group was formed to co-ordinate the development of a number of community-led avitourism enterprises associated with the pre-existing ‘Zululand Birding Route’ and Important Bird Areas. Recruiting, training and mentoring bird guides from the local communities has been a core objective of the programme. Over 35 bird guides from local Richards Bay communities have been trained at BirdLife South Africa’s training facility at Wakkerstroom. Visiting birders have revealed unprecedented interest in using community bird guides and, as a result, additional guides are being trained every year with all those trained either employed full time by the project or working independently as freelance guides. Workshops are also held for guides to share ideas, keep skills honed and develop marketing and business management abilities. As a result of these efforts, it is estimated that the local economy has been bolstered to the tune of R11 million.

In 2007, the ‘Kruger to Canyons Birding Route’ was established, based on the successful ‘Zululand Birding Route’ model. This initiative is pioneering exclusive partnerships with ‘Birder Friendly’ accredited accommodation establishments supporting local communities through, for example, environmental education initiatives and skills development projects. More recently, these ideas have been exported to Australia, with Rio Tinto, Birds Australia (BirdLife in Australia) and local government exploring the possibility of similar ‘birding routes’ in the Kakadu area of Australia’s Northern Territory.