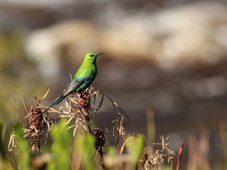 South Africa is known for its high levels of endemism; fynbos and grassland are two biomes with large numbers of endemic birds and species of conservation concern, and are thought to be especially vulnerable to climate change. The biomes are however experiencing differing patterns of climate change (Huntley & Barnard 2012). The fynbos biome (South and South Western Africa) is characterized by an overall warming trend with decreasing precipitation, whilst the grassland biome (high elevations in East and South-East Africa) has shown no clear pattern in overall temperature change, but decreased rainfall and a reduction in the frequency and duration of frost (Huntley and Barnard 2012).

Climate induced changes in abundance and subsequent levels of species richness was investigated across Southern Africa using distribution data from 92 bird species, 9 of which occur in both biomes, 43 of which are endemic to southern Africa, and 12 of which are of global or regional conservation concern. Projections were made under future climate scenarios for 2025, 2055 and 2085 (Huntley and Barnard 2012).

Species richness is expected to shift southward for both biomes and the change is likely to occur on a short time scale—both the mean and median species richness for both biomes is predicted to have already declined by 12-17% by 2025. Whilst there is variation in species responses, with some species (e.g. Harlequin Quail Coturnix delegorguei) expected to gain range sizes by more than three times their current range, more are projected to contract, with average reductions in species richness of 34% by the end of the century.These changes are likely to influence the functioning of ecosystems, especially since important pollinators such as Malachite Sunbird Nectarinia famosa are projected to decline more than other species on average.