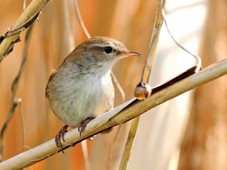 The Community Temperature Index (CTI) is based on the relative composition of warm- and cold-adapted bird species and shows that European avian communities are rapidly shifting towards warm adapted species, but are still lagging behind climatic changes across Europe.

Increase in Community Temperature Index for birds during 1990-2008; the height of each arrow is proportional to the magnitude of change.

The relative composition of warm and cold adapted species can be determined using the community temperature index (CTI). This is determined by first calculating the species temperature index (STI)—the average temperature experienced by a species across its range—a proxy for temperature preference of a species. The STIs can then be combined, weighted by the abundance of each species within the community. The CTI index can then be used to look at how communities are responding to climatic changes (Devictor et al. 2012, Devictor et al. 2008, Godet et al. 2011, Lindström et al. 2013, Roth et al. 2014).

The index has been used to show that European bird communities are becoming increasingly warm-adapted, but are lagging 212km behind northward shifts in temperature across Europe (1990–2008), with the rate of change varying spatially. Changes are for example must faster in Sweden than the UK or the Netherlands (Devictor et al. 2012).

Similar results have been found in country specific studies. In France, breeding bird communities have become increasingly warm-adapted but are lagging 182km behind northward shifts in temperature (between 1989 and 2006) (Devictor et al. 2008), whilst winter wader communities in French estuaries have also shown a significant shift to warm-adapted communities (between 1977 and 2009) (Godet et al. 2011). Swedish bird communities are becoming increasingly warm-adapted, but are lagging by 15.4 km/year and 5.6 km/year (depending on the dataset used) (Lindström et al. 2013), and similarly in Switzerland, the CTI values of bird communities has significantly increased in just eight years (between 2003 and 2010), with similar changes across a whole altitudinal gradient (Roth et al. 2014).

The CTI index shows the signal of change in composition between warm- and cold-adapted species, but doesn’t say which and how specific species are being affected by climate change. Across Europe, similar results were found when looking at species abundance and species presence absence, suggesting the change towards warm adapted communities is the result of both changes in relative abundance and the occurrence of different species (Devictor et al. 2012).

Understanding how community compositions are expected to be altered is important for determining the impacts of climate change on ecosystem functioning. The climatic debt observed in birds has been observed similarly in butterflies (Devictor et al. 2012), both taxonomic groups with generally high dispersal. The impact on other groups, and subsequent effects on food web dynamics is therefore likely to be high.