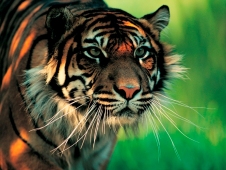 Rising oil and gas prices, combined with a growing political impetus to reduce anthropogenic carbon emissions, are driving a rapid expansion in biofuel production. Yet, it is becoming increasingly apparent that the conversion of land for biofuel crops—such as oil palm in South-East Asia—is destroying and degrading forest ecosystems and threatening the biological diversity they sustain. At the same time, the production of biofuels on formerly forested lands is likely to result in significant CO2 emissions that will accelerate, rather than arrest, climate change.

Biofuels—namely bioethanol and biodiesel—are produced from agricultural commodities such as sugarcane, rapeseed, soya bean and palm oil. Because they are derived from non-fossil material, they have been advocated as a carbon neutral alternative to fossil fuels that could help reduce atmospheric greenhouse gases. High yields and low prices make palm oil a popular source of biodiesel (Carter et al. 2007). Consequently, production has expanded rapidly over the last 40 years (Danielsen et al. 2009), and is predicted to increase further as demand for biofuels grows (Koh and Wilcove 2007, 2008; Fitzherbert et al. 2008).

Over 80% of the world’s oil palm plantations are located in Indonesia and Malaysia (FAO 2007); two countries that are also home to some of the most biologically diverse, tropical forest in the world. Unfortunately, many of the region’s oil palm plantations have been established at the expense of these forests, causing considerable biological impoverishment (Aratrakorn et al. 2006, Maddox et al. 2007, Fitzherbert et al. 2008). For example, a study in Peninsular Malaysia found that, following the conversion of primary forest to oil palm plantation, forest-bird species richness declined by 77%, with the conversion of secondary (logged) forest resulting in a similar decline (Peh et al. 2005, 2006).

It has been estimated that tropical forests store over 45% of the world’s living terrestrial carbon (Soepadmo 1993) and that deforestation may account for a quarter of all carbon emissions (Skutsch et al. 2007). A recent study calculates that it would take between 75 and 93 years for the carbon emissions saved through the use of biofuel to compensate for the carbon lost through forest conversion, depending on how the forest was cleared. If the original habitat was peatland, carbon balance would take more than 600 years. Conversely, planting oil palms on degraded grassland would lead to a net removal of carbon within 10 years (Danielsen et al. 2009).

It is becoming increasingly apparent that the replacement of forest with oil palm plantations is causing considerable biodiversity loss whilst exacerbating climate change. Other biofuel crops, such as soya bean and sugarcane, are likely to be associated with similarly adverse effects if native habitats are cleared for their development. If bioenergy is to have any role in climate change amelioration, biofuel crops should only be established on non-forest land of low conservation value.