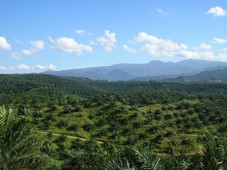 Bioenergy is one mitigation action being utilised to reduce emissions contributing to global temperature rises. The impacts of bio-crops on wildlife can however be negative if not appropriately planned. In Europe, bioenergy is predicted to have a negative impact on a larger proportion of species (96%) compared to climate change alone (average of 37% across scenarios), whilst the direct impact of climate change is expected to have an influence of greater magnitude. In tropical regions, growth of palm oil for both biofuel and food production is driving large biodiversity loss, and vastly reducing carbon sequestration.

With the international community committed to limiting temperature rises to less than 2°C above pre-industrial levels (UNFCCC 2009), mitigation action is required. Bioenergy is one such mitigation action, with bioenergy use expected to double in the UK during 2010-2025 (Howes et al. 2011).

While certain kinds of bioenergy can play a sustainable role in the renewable energy mix, its rapid growth in the absence of safeguards has led to significant environmental damage. In the northern hemisphere for example, public incentives for biogas production has led to the conversion of natural grasslands to maize in Germany with potential negative impacts on farmland species such as Eurasian Skylark Alauda arvensis and Grey Partridge Perdix perdix (Gevers et al. 2011). In the south-eastern USA, global demand for wood pellets for bioenergy has led to increased logging in biodiversity-rich hardwood forests, threatening habitats of species such as Cerulean Warbler Dendroica cerulean (NRDC 2015).

Bioenergy is a prominent land use in tropical regions; oil palm is one of the fastest expanding crops, with production in Indonesia predicted to rise by 2 million tonnes in 2014 (FAO 2014). It is however estimated that palm oil plantations take 75-93 years to compensate for the carbon lost through forest conversion, or nearly 700 years if peatland is converted (Danielsen et al. 2009). Avian species richness is also vastly reduced in these plantations compared with forest, highlighting the negative biodiversity impacts if large-scale biofuel production replaces natural forest (Danielsen et al. 2009).

The range shifts of 156 European bird species under climatic scenarios of either 2°C (climate only and combined with mitigation) or 4°C (climate only wth no mitigation) showed that the magnitude in range size changes were greater for the direct impacts of climate change. The median range size resulting from the direct impact of climate change varied from a 98-100% loss to an increase greater than a 20 times increase. The changes as a result of the combined effects of climate and mitigation were much smaller; varying between a loss of 38% and a gain of 4%, averaging at a loss of 2.6%.

Despite the magnitude of change being greater under direct climate change scenarios, bioenergy is predicted to have a negative impact on a larger proportion of species (96%) compared to climate change alone (average of 37% across scenarios). Furthermore, an overlap between sites of expected biomass production and those of conservation priority varied between 1.9 to 4.2%, suggesting likely direct conflict between energy productionand biodiversity conservation in the future (Meller et al. 2015).