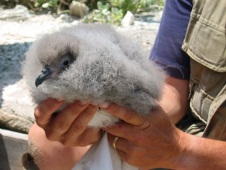 The Endangered Bermuda Petrel was thought to be extinct for almost three centuries before a small population was discovered nesting on a group of four tiny rocky islets in Bermuda in 1951. An intensive recovery programme involving provision of artificial nest burrows raised the population from 18 pairs when rediscovered to 70 pairs in 2003, but then heavy seas during a severe hurricane destroyed many of the nesting burrows. In 2004, 14 chicks were translocated to Nonsuch island, which is larger, higher, and therefore safer. In 2008, the first translocated chicks returned to the island and by 2014 there were 29 adults returning to breed.

The dedicated actions of conservationists in Bermuda have succeeded in reviving the fortunes of one of the world’s rarest seabirds: the Endangered Bermuda Petrel Pterodroma cahow. Locally known as the Cahow, the Bermuda Petrel was thought to be extinct for almost three centuries. However, in 1951, 18 pairs were found nesting on a group of rocky islets in Castle Harbour, towards the north-eastern end of Bermuda’s main island. The four tiny islets cover a total area of less than one hectare and are extremely vulnerable to erosion and wave damage during hurricanes. On the islets, the birds nest in limestone crevices, a sub-optimal nesting site for a species which naturally favours self-excavated soil burrows.

Since its rediscovery, the species has been the recipient of an intensive recovery programme. Nest burrow entrances have been fitted with baffles to exclude White-tailed Tropicbird Phaethon lepturus—the petrel’s principal nest-site competitor—and additional artificial burrows have been provided. As a result of these measures, the species has made a slow, but steady recovery, with the population size increasing exponentially since 1961 (Madeiros et al. 2012). In 2003, a total nesting population of 70 pairs raised a record 40 young (Madeiros 2003). Unfortunately, in September of that same year, hurricane Fabian struck Bermuda. Three of the Castle Harbour islets were covered by 35-foot waves and two partially collapsed (Madeiros 2004). Luckily, the petrels were at sea when the storm hit and conservationists were able to repair many of the damaged nest-sites. When the birds returned, recordings of their courtship calls were used to encourage them to move to safer artificial burrows on higher ground.

The devastating impact of hurricane Fabian dramatically illustrated the population’s extreme vulnerability. Fortunately, plans were already underway to re-establish the Bermuda Petrel on the nearby island of Nonsuch. Since 1962, the island has been the site of an ambitious restoration project that included the eradication of rats and other predators and the establishment of native vegetation similar to that which greeted the first settlers in the early 1600s. Being larger and higher, Nonsuch should offer more protection from hurricanes and rising sea levels, and, at 6.5 hectares, it also provides greater potential for the population to expand.

In 2004, the Bermudan Department of Conservation moved the first 14 chicks into artificial burrows on Nonsuch island. Since this time a hundred chicks have been moved to the new colony, and the translocation project has been hailed a great success. In 2008, the first translocated chicks returned to the island and in 2014, 29 returning adults were recaptured on nests back on Nonsuch Island (Madeiros et al. 2014).

Recommended Citation:
BirdLife International (2015) Bermuda Petrel is being conserved through translocation and provision of artificial nest-sites. Downloaded from http://www.birdlife.org on 29/01/2023