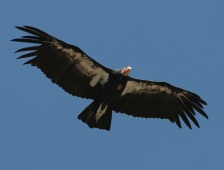 California Condor had declined to just nine individuals in the wild in 1985 owing to poisoning from the ingestion of lead ammunition in carcasses, plus other threats. The last birds were taken into captivity in 1987 and a captive-breeding programme was initiated. The first releases back into the wild took place in 1992, and following some initial difficulties the programme has now led to a population of 151 birds in the wild. Although much work remains before the population can be regarded is self-sustaining, it is clear that without intensive interventions, the species would certainly have disappeared.

By 1985, just nine California Condor Gymnogyps californianus remained in the wild and the species teetered on the verge of extinction. Several factors contributed to the precipitous decline of the population, including in particular poisoning from the ingestion of lead ammunition in carcasses. A controversial decision was made to bring the remaining birds into captivity and, in April 1987, the last free-flying condor was captured and integrated into a captive population of 27 individuals.

In spring 1988, the first condor chick successfully hatched at the San Diego breeding centre, and by 1991 the project had built up a population of over 50 birds. The following year, the U.S. Fish and Wildlife Service released two captive-born juveniles at the Sespe Condor Sanctuary. After a gap of five years, condors were once again in the skies over California. Since this time additional captive breeding programmes have been established at Los Angeles Zoo, Portland Zoo and the World Center for Birds of Prey (Peregrine Fund) in Idaho. Further reintroductions in California have been followed by releases in Arizona's Grand Canyon (1996) and Baja California, Mexico (2002) (Cade et al. 2004, Wallace 2005). By 2002, more than 200 condor chicks had hatched in captivity and, in April 2002, the first wild-laid condor chick hatched in Southern California. However, despite the success of the captive breeding programme, released birds continued to suffer unsustainably high levels of mortality (Meretsky et al. 2000).

The principal threat remains lead poisoning, while naive condors have also died as a result of collisions with power lines. Many of the newly released condors exhibited significant behavioural problems as a result of over familiarity with humans and some had to be re-captured. For a time, the recovery of the California Condor looked far from assured and the project attracted criticism (Meretsky et al. 2000, Beissinger 2001, 2002). Fortunately, changes in the rearing practices have eliminated behavioural problems associated with tameness, and birds are now conditioned to avoid power lines. Most importantly, legislation has been passed banning the use of lead ammunition within the condors range. As of April 2008, the total population of California Condor numbered 315 individuals, of which 151 were in the wild (80 in California, 64 in Arizona and 7 in Baja California).

The California Condor remains Critically Endangered. To date, just seven chicks have fledged in the wild since reintroductions began and no second generation birds have yet matured to breeding age (BirdLife International 2008). Although much work remains before the population can be regarded is self-sustaining, it is clear that without intensive interventions, the species would certainly have disappeared.

Schwarzenegger gets the lead out
The Peregrine Fund California Condor facts