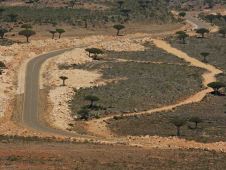 The Socotra Archipelago—described as the ‘Galápagos of the Indian Ocean’—is one of world’s most biologically important island groups. Unfortunately, rapid expansion of the islands’ road network, including controversial plans for a new ring-road, threatens to irreversibly damage its unique natural heritage.

The Socotra Archipelago, located in the northwest Indian Ocean between the Arabian Peninsula and the Horn of Africa, is one of world’s most biologically important island groups. Fifteen million years of geological isolation from mainland Africa have resulted in extraordinarily rich and distinct flora and fauna. Levels of endemism are extremely high, and there are many ‘relict taxa’ whose continental ancestors have long disappeared. Thirty-seven percent of Socotra’s 825 plant species, 90% of its reptile species and 95% of its land snail species are found nowhere else on earth.

Despite a civilization dating back to prehistory, Socotra has remained remarkably unspoilt. It is geographically isolated and until recently was inaccessible during the monsoonal months due to high winds and rough seas. Recognising Socotra as an exceptional near-pristine wilderness, UNESCO formally declared the islands a World Heritage Site in 2008.

In recent years, Socotra has become far more accessible to the outside world. A new airport near the capital town of Hadiboh provides near-daily flights between the archipelago and the Yemeni mainland. Rapid development is underway and a sizeable expansion of the road infrastructure has begun. Although improving the transport network is essential for Socotra’s future prosperity, much of the road building to date has been badly planned and is frequently unnecessary. It has also resulted in considerable damage to the island’s unique natural heritage. Many of the roads are of an inappropriate scale, often routed through areas with little or no permanent human population but of considerable biodiversity value. Of particular concern is the continuing construction of a ring road around the main island, which will dissect several nature sanctuaries with devastating consequences for biodiversity. As many as 19 bird species of international and regional conservation concern could be adversely affected by this development.

In most recent cases of road-building, there has been no environmental impact assessment or evaluation of the socio-economic impacts of construction. For example, a new road near Hadiboh was constructed across the mouth of the Sirihin Lagoon, completely cutting it off from the sea. This has caused the build-up of stagnant water and the deaths of hundreds of fish with direct economic consequences for local people. Importantly, the Environment Protection Agency (EPA) and Socotra Conservation and Development Programme (SCDP) repeatedly requested that a bridge be constructed across the lagoon entrance to maintain the flow of water, but were ignored by the contractor.

Protection of Socotra’s most important natural sites is enshrined in Yemeni law through Presidential Decree no. 275 which established a Conservation Zoning Plan for the archipelago. However, much of the recent road construction is in direct contravention of this law. For example, in 2003, a plan to build a road through the Ditwah Lagoon Nature Sanctuary was only halted at the last minute by a presidential intervention.

It is vital for Socotra’s flora and fauna, and for its rapidly expanding tourism industry, that the islands’ ecological integrity and beauty are not recklessly compromised through ill-conceived development. The future expansion of the archipelago’s road network must be better planned and utilise environmentally responsible and sustainable construction methods.