Back from the brink: species can be saved from extinction 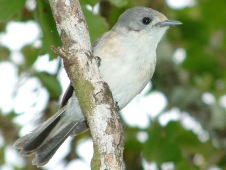 Six species provide classic examples of how intensive conservation efforts can save species from extinction. Black Robin, Seychelles Magpie-robin, Mauritius Parakeet, Rarotonga Monarch, Asian Crested Ibis and Lear’s Macaw were all once reduced to just a few remaining individuals, but now have much healthier populations as a result of concerted conservation efforts and recovery programmes.

Black Robin Petroica traversiis endemic to the Chatham Islands (New Zealand). The rescue of this species from its tiny refuge on Little Mangere Island is one of the most remarkable successes in species conservation (Aikman et al. 2001, Butler and Merton 1992). Following human settlement of the islands, the species declined rapidly as its forest habitat was lost and degraded, owing to predation by introduced rats and cats. In 1976, when the population had declined to just seven birds, the remaining individuals were relocated to nearby Mangere Island, where thousands of trees had been planted to provide suitable habitat. Nevertheless, by 1980, numbers had fallen to five (three males and two females): the smallest population of any bird species for which precise figures were known. Nest protection, supplementary feeding, and a cross-fostering programme (with the congeneric Tomtit P. macrocephala) were then established, and the population began to recover steadily. Individuals were later introduced to South East Island, and by 1989 the population had topped 100 individuals (Butler and Merton 1992), at which point management ceased. The population continued to rise until carrying capacity was reached in the late 1990s, since when it has been stable at around 250 birds (D. Merton in litt. 2004), with full surveys in 2011 estimating a total population of 260 individuals (D. Houston in litt. 2011).

Rarotonga Monarch (or Kakerori) Pomarea dimidiatais endemic to the Pacific island of Rarotonga (Cook Islands). Although common in the mid-1800s, the species subsequently declined rapidly and, following the collection of a few specimens in the early 1900s, was not recorded again until 1973. In 1983, 21 birds were discovered, and a survey in 1987 estimated the population at 38 individuals, but declining (Robertson et al. 1994). A recovery plan was prepared in 1988, and implementation began later that year. Intensive control of predators (particularly black rats Rattus rattus) reduced adult mortality from 24% to 9% (H. Robertson and E. Saul in litt. 2004), with nesting success increasing from 15% to 63% (Robertson et al. 1994). By 2000, the population on Rarotonga had reached 221 individuals, leading to its downlisting from Critically Endangered to Endangered on the IUCN Red List. During 2001–2003, 30 young birds were transferred to the rat-free island of Atiu (200 km north east of Rarotonga) in an apparently successful attempt to establish a second ‘insurance’ population (H. Robertson and E. Saul in litt. 2004). By August 2004, at least 281 birds were found on Rarotonga, and 25 on Atiu, giving an overall estimated population of 306 individuals. However, five cyclones passed through the southern Cook Islands in five weeks in summer 2005 and though direct mortality was less than expected, a very poor breeding season followed. Nevertheless, by 2007 the population had increased to 314 birds; 271 on Rarotonga and 43 on Atiu (Robertson et al. 2009) and by August 2011 the population was estimated at c.380 birds, including 69 yearlings (Robertson et al. 2011, H. Robertson in litt. 2011).

Mauritius Parakeet Psittacula eques had been reduced to fewer than a dozen birds in 1986, including just three females, owing to habitat destruction and alien invasive species (Thorsen and Jones 1998). However, captive breeding and release, control of invasive predators, provision of artificial nest cavities, and brood manipulations have increased the wild population to 343 birds by 2007, leading to its downlisting from Critically Endangered to Endangered. Numbers fell to an estimated 290 birds by August 2006, probably due to Psittacine Beak and Feather Disease (PBFD) (V. Tatayah in litt. 2006), but recovered to over 500 birds in August 2010 (Jones 2010), with 129 young fledging in 2011/2012, and a known population of c.580 birds (V. Tatayah in litt. 2012).

Seychelles Magpie-robin Copsychus sechellarum was originally present on at least eight islands in the Seychelles but, in 1965, only 12–15 birds remained on Frégate (Gaymer et al. 1969). In 1994, following eradication of introduced cats, a recovery programme was initiated, involving habitat creation, supplementary feeding, nest defence, provision of nest boxes, control of introduced species and translocations to other islands. This allowed the population size to increase to c.178 birds on four islands in 2006 (82 on Frégate, 46 on Cousin, 32 on Cousine and 18 on Aride) (N. Shah in litt. 2006). Three of the four populations reached carrying capacity, with only small population increases anticipated as habitat continues to improve (R. Bristol in litt. (2005), and the species was downlisted from Critically Endangered to Endangered in 2005. In 2008, 20 birds were translocated to Denis and within six months there were at least two successful breeding attempts on the island and, by early 2009, the total population on the five islands was estimated at c.200 individuals (Anon. 2009).

Asian Crested Ibis Nipponia nipponhistorically nested in the Russian Far East, Japan, and China, and was a non-breeding visitor to North Korea, South Korea and Taiwan, China but is now extinct in almost all of its former range (Birdlife International 2001). In May 1981, following three years of nationwide surveys in China, a population of only seven birds (four adults and three chicks) was found in the wild and, in the same year, the last five wild birds in Japan were captured and taken into captivity (Ding Changqing 2010). Since the discovery of nesting birds in 1981, emergency regulations have been enacted to prohibit logging, the use of agrochemicals in rice-fields and the use of firearms for hunting, nest-sites are patrolled and guarded during the breeding season, and rice-fields are maintained as feeding-sites in winter. By 1986 a captive breeding programme had been initiated at Beijing Zoo (Ding Changqing 2010), and breeding programmes are now on-going at three zoos in China (Su Unshan 2007), with successful breeding occurring since 1989, and a total of c.600 birds in captivity in 2010 (Yu Xiaoping et al. 2009, Ding Changqing 2010). By 2000, the wild population numbered over 50 mature individuals and the species was downlisted from Critically Endangered to Endangered and, by June 2002, the wild population was maintaining a steady increase and numbered 140 birds. The most recent population estimate is of c.500 wild individuals in 2006, all in Shaanxi province in central mainland China (Su Unshan 2007). Reproductive success has increased (Yu Xiaoping et al. 2006), both in the wild and captivity, and there are plans to begin reintroduction of birds to Sado Island, Japan (Chikatsuji 2007).

In addition to these six species, there have been several other spectacular recoveries of highly threatened species, including the Pink Pigeon (Nesoenas mayeri) on Mauritius (from a low of 10 wild individuals to a current population of c.350–450 birds) and Campbell Islands Teal (Anas nesiotis) of New Zealand (formerly fewer than 50 mature individuals, now 100–200 adults and reintroduced on Campbell Island following a successful rat eradication).

These remarkable recoveries show that species can be brought back from the brink of extinction through sustained conservation action informed by detailed research when adequate resources and political commitment are applied.

Recommended Citation:
BirdLife International (2013) Back from the brink: species can be saved from extinction. Downloaded from http://www.birdlife.org on 09/08/2022