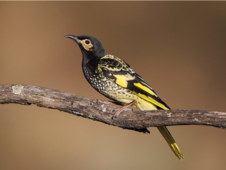 Major fires in the forests of southern Australia during 2019–2020 burnt up to 19 million hectares and impacted an estimated 180 million birds. Many threatened species were brought closer to extinction, while other species not previously considered at risk now need to be re-assessed. However, stories of survival give room for hope, as does evidence of recovery from past fires. The greatest concern is that climate change will increase the frequency of such catastrophic events to levels beyond their capacity to recover, but there is a great determination to learn from the experience and develop responses that will mitigate the impacts of future fires.

Following record-breaking heat and intense drought, unprecedented bushfires swept across southern Australia during the summer of 2019–2020. Up to 19 million hectares were burnt (Filkov et al. 2020), often with exceptional intensity, including 20% of the forests in south-eastern Australia (Boer et al. 2020). Some parts of the forest are still almost silent a year later, others are recovering. It has been estimated that up to 180 million birds may have been impacted by the conflagration (van Eeden et al. 2020), with the corpses of birds as big as eagles washed ashore in places where fires swept down to the sea. Many that survived the initial fires probably died later from injuries, starvation or increased exposure to predators. The preceding drought had been so intense and prolonged that normally wet habitats like rainforests were incinerated for the first time in living memory and damp gullies, often refuges from normal fires, sometimes supported the most intense fires because they had heavier fuel loads (DPIE 2020). Many threatened species were brought closer to extinction, while other species not previously considered at risk now need to be re-assessed. For example, on Kangaroo Island, off South Australia, all 17 endemic subspecies are thought to have lost more than 30% of their populations, causing them to suddenly meet thresholds for listing as threatened (Legge et al. 2020).

However, even in a landscape so blackened, there are embers of hope, with some birds showing remarkable resilience. Fears that the tiny population of the Kangaroo Island subspecies of the Glossy Black-Cockatoo Calyptorhynchus lathami halmaturinus had been heavily reduced were dispelled by post-fire surveys showing that most cockatoos had survived the fire. Moreover, the cockatoos have had their best breeding year on record, possibly because their main predator, a possum, was more susceptible to the fires than the cockatoo.

Bushfires are a natural seasonal phenomenon in Australia, and many native plant and animal species benefit from, and sometimes rely on, periodic burns. Evidence of recovery from past severe fires demonstrates the capacity of the Australian bird fauna to cope with occasional losses. However, climate modelling predicts that the combination of heat and drought that produced the recent extreme fire weather conditions will become more frequent due to human-induced climate change, and many species will struggle to recover sufficiently between more frequent, extreme events.

Learning from the experience of the recent fires so that responses to future fires can be faster and better planned will help mitigate the impacts (Wintle et al. 2020). For example, enhanced information on the locations of important populations will optimise operations to ‘rescue’ plants and animals ahead of fire fronts. The locations and needs of biodiversity assets can also be included in fire response plans, so that their protection is prioritised along with protection of life and property.

From the ashes: 5 birds affected by Australia’s bushfires

Key message: Declines can be quick and catastrophic
Case studies