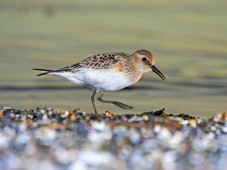 Increasing temperatures in the high Arctic are causing advances in the timing of breeding for some shorebirds such as Baird’s Sandpiper Calidris bairdii, but not always in synchrony with shifts in the peak availability of the insects that sandpiper chicks feed on, with subsequent effects for chick growth rates.

Climate change has caused mismatches between timing of breeding and peak food availability.

The timing of prime chick hatching will occur in sync with the peak abundance of prey to ensure high food availability at the time when energetic requirements are highest (Visser et al. 2006). In the arctic, the seasonal abundance of arthropods is closely related to temperature, often resulting in very short-lived peaks (Hodkinson et al. 1996). This is likely to make arctic breeding shorebirds, who chicks rely on arthropods, highly vulnerable to climate change and possible temperature induced mismatches.

To determine any changes in timing of breeding of these species, historical data from 1954 and 1977 was compared with those collected in 2005-2008 (McKinnon et al. 2012).  Active nest searching of the Baird’s Sandpiper also took place to determine the impact of nchrony on chick growth rate.  A range of variables were measured at each nest including the date of first egg laying and the weight of chicks every 2 days from hatching. The mean daily air temperature was determined for the period encompassing lay dates for all birds using an automated weather station and arthropod biomass was determined using pitfall traps in the two most commonly used feeding habitats; wetland and mesic tundra.

Body mass for Baird’s sandpiper chicks hatching during or outside the period of peak food supply. 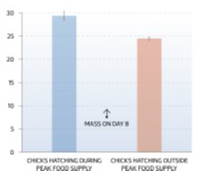 All three species had earlier lay dates in the 2000s compared to 1954, but the result was only significant for the White-rumped Sandpiper, with a shift of 8 days. Chicks hatching in the peak abundance of cranefly had a higher mass (29.4 ± 2.0 g) than those hatching outside of the peak (24.5 ± 0.7 g). Chicks of lower mass may have lower chance of both pre (Hegyi & Sasvari 1998) and post fledging survival (Naef-Daenzer et al. 2001), as has been demonstrated in passerines (Naef-Daenzer et al. 2001) and other shorebirds (Hegyi & Sasvari 1998). The compensatory growth often associated with limited resources early in life can also have profound knock on effects in adult life, influencing the ability to acquire suitable breeding territories, dominance ranks and a reduction in lifespan (Metcalfe & Monaghan 2001).

Recommended Citation:
BirdLife International (2015) Arctic-breeding shorebirds are suffering mismatches between the timing of breeding and food supply. Downloaded from http://www.birdlife.org on 22/05/2022