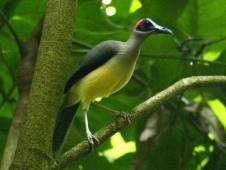 Grey-necked Picathartes (Vulnerable) occurs in protected areas throughout its west-central African range, including the Cross River National Park in Nigeria, but encroachment by farmers, hunters and loggers means that even these populations are under threat. © John Giusti

In 2005, the African protected area network received around US $300 million, less than 40% of the funding required for an expanded and effectively managed system. In Nigeria, the annual allocation for protected area management, 1993–2000,was a small fraction of the budgeted requirements, and the money released was even less. Making up the difference would go a long way to ensuring the conservation of 90% of the continent’s irreplaceable biodiversity—in global terms, an absolute bargain

Estimated costs of protected areas conservation in Africa, developing countries and the world, 2005

Protected Areas (PAs) are cornerstones of biodiversity conservation, critical for achievement of the 2010 target (to achieve a significant reduction in the rate of biodiversity loss) and Millennium Development Goals. Over the last decade the PAs network has continued to expand and terrestrial PAs now cover 12% of the earth’s land surface. The marine realm is poorly covered, but the terrestrial network also has many gaps, failing to include many ecosystems and species that require protection. To address these gaps, in 2004, parties to the Convention on Biological Diversity (CBD) adopted a programme of work on PAs to support the establishment and maintenance of comprehensive networks of terrestrial (by 2010) and marine (by 2012).

Despite this commitment, there is a huge challenge to finance the effective management of existing PAs, let alone expansion of the network. In Africa, approximately US $300 million per year is spent to manage about 1,254 PAs covering more than two million km2 (approximately 9% of the continent). This is estimated to be 38% of what is needed for an expanded and comprehensively managed PA system (Bruner et al. 2004). In the developing countries, where the world’s biodiversity is concentrated, the spending on PAs is about US $800 million per year, 20% of what is needed (Moore et al. 2003, Bruner et al. 2004). Globally the figure is about US $6 billion per year, 33% of the requirement (James et al. 2001).

PAs are a major source of income for many African countries (BirdLife International 2005). Most African governments have set aside substantial areas for protection and developed polices to conserve PAs, demonstrating their commitment. Nonetheless, they face daunting challenges in reconciling immediate development goals with the investment needed for natural resource management. Nigeria, for example, has more than 1,173 conservation areas. Amongst these, eight are national parks covering a total of 24,000 km2 or 3% of the land area and located across all major ecological zones except the marine ecosystem. Seven of these parks are also Important Bird Areas. The parks are funded mainly from the Federal Government. However, they experience financial difficulties due to inadequate allocation and delayed release of budgetary resources, which are often overtaken by inflation, acutely affecting execution of workplans. For instance in 2000, about US $26 million was requested for national parks management, $3 million was allocated within the national budget and only half of this was received by parks managers (Marguba 2005).

Key message: We can afford to conserve global biodiversity if we want to
Case studies