Alliance for the conservation of the South American Pampas grassland 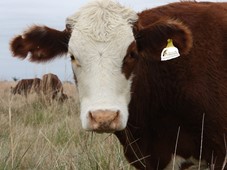 The Pampas grasslands of southern South America provide some of the richest cattle grazing in the world, and are of global importance for biodiversity conservation, with over 280 bird species including restricted-range species and a suite of wintering migrants from North America. This biome is however under threat due to agricultural intensification, leading to the forming of the Southern Cone Grassland Alliance – a partnership that works to promote sustainable cattle grazing practices to increase both meat productivity and biodiversity conservation.

The grassland biome of southern South America is important for both carbon sequestration and avian diversity, but is under threat due to agricultural intensification (Scurlock and Hall 1998, Di Giacomo and Krapovickas 2005, Overbeck et al. 2007). Traditional beef producers, whose grazing livestock helps maintain the mosaic of long, short and tussock grassland on which birds and other biodiversity depend, have seen their markets captured by intensively-reared “feedlot” beef. Pasture has been turned over to crops such as soybeans, or afforested with alien species including pine and Eucalyptus.

A cornerstone of the Alliance’s approach has been the development of a “bird friendly” natural grasslands beef certification scheme. Meat products bearing the Alliance’s Saffron-cowled Blackbird Xanthopsar flavus logo commands much higher prices than feedlot beef.

In the first phase of the project, pilot sites were established in all four countries. All are within Important Bird and Biodiversity Areas (IBAs), and range from a single ranch to a chain of properties. The different regimes being trialed include variable stocking rates, rotational grazing, restoration of native grasslands, and use of fire as a management tool. In addition to year-round monitoring of birds and forage plants, an annual wintering shorebird survey is carried out at each pilot site by hundreds of enthusiastic local volunteers.

The project has generated huge interest from ranchers and, increasingly, from big meat production and distribution corporations too. Attendance at the annual Meeting of Natural Grassland Ranchers has doubled from one year to another. This meeting provides an ideal stage for the exchange of experiences between producers and conservationists, and the development of joint agendas. Conservationists, ranchers and government representatives from North America and even further afield have attended, enabling them to take home lessons for their own grassland projects.

A second phase of AVJCF funding enabled the Alliance to expand its work to more ranchers in the Pampas. By December 2012, Alliance grasslands management practices were being applied at 35 properties, covering a total of 116,479 hectares. More than 70 ranches and other businesses had joined the Alliance, bringing a further 200,000 hectares under the “responsible production” model.

Support from the AVJCF has been fundamental to the Southern Cone Grasslands Alliance, enabling BirdLife and its Partners to make progress towards the “mainstreaming” of biodiversity conservation into the production landscape.

Recommended Citation:
BirdLife International (2015) Alliance for the conservation of the South American Pampas grassland. Downloaded from http://www.birdlife.org on 08/12/2022