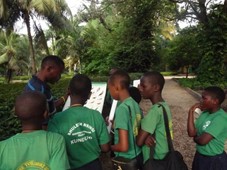 The Wildlife Clubs of Africa project (WCA) uses bird conservation to bridge the digital divide between developing and developed countries, by linking over 350,000 African children with each other and the rest of the world through a network of school-based wildlife clubs.

The project has enabled African children to join the global conservation community, and integrates environmental conservation into formal and informal education programmes in primary and secondary schools, particularly targeting poor communities who are highly dependent on natural resources.

A needs assessment among the BirdLife Partners in Africa had found that all were involved in providing environmental education to children through school wildlife clubs, and wanted to develop this work further. Partners also wanted to improve communication facilities to enable children in wildlife clubs throughout Africa to exchange experiences.

The Aage V. Jensen Charity Foundation provided funding for the first phase of the project in 2007. Each of the 16 Partners recruited a Coordinator for Environmental Education, who worked with other institutions, including government agencies, to make environmental education part of national education policies and school activities.

A Wildlife Club/Environmental Education Coordinators Network was established, and all 16 Partners contributed to the Wildlife Clubs of Africa Manual, which provides comprehensive guidelines for establishing and managing wildlife clubs. An internet-based ‘experience exchange network’ on biodiversity conservation and sustainable use was established. This has become a useful portal for posting information, news and reports about wildlife club activities and the BirdLife Africa Partnership.

By 2010 it was estimated that over 350,000 children from 5,862 schools had taken part in wildlife club activities, including bird counts, “greening” school grounds, and growing and supplying tree saplings to their communities. Indoor activities included lectures, art and drama. There were exchange visits between schools, and a twinning arrangement was established between a school in Northern Ireland, UK, and four schools in Ghana. Club members took part in international events such as World Migratory Bird Day, World Environment Day and the International Day for Biodiversity.

The first phase of the project ended in February 2011, by which time all 16 Partners were establishing at least one major ICT centre to support the programme. Following the success of the project, the AVJCF provided funds for a second phase, which is being implemented by BirdLife Partners in Botswana, Ghana, Nigeria, Sierra Leone and Zimbabwe. Approximately 2,000 wildlife clubs with a combined membership of almost 150,000 children are participating.

In Sierra Leone, the BirdLife Partner has reactivated six nature clubs, and established 11 new clubs, and twinning arrangements have been completed with school wildlife clubs in Nigeria.

Links are being built with migratory flyway conservation projects between Europe and Africa, and environmental education is being “mainstreamed” into the national curriculum for primary education in Ghana, which will serve as a model for other Partners.

Key message: Many actions are underway but there are still gaps
Case studies