Afforestation can be bad for biodiversity 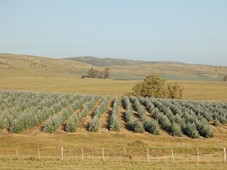 Grasslands are important for both carbon sequestration and biodiversity but are often misidentified as providing opportunities for forest restoration. Restoration of forest in grassland biomes can be devastating for biodiversity and ecosystem services and illustrates the importance of better integrating the distinct ecologies and conservation needs of forest and grass biomes into science and policy.

Both grasslands and forests are biodiverse and provide essential ecosystem services (Feld et al. 2009). The destruction of one for the creation of the other—as has been seen in the southern cone grasslands of South America—is therefore deeply concerning. A recently published report, Where Tree Planting and Forest Expansion are Bad for Biodiversity and Ecosystem Services, finds that a fundamental misunderstanding and undervaluing of natural grasslands is resulting in their rapid destruction.

The world’s ancient and biodiverse grasslands, savannas, and open-canopy woodlands (collectively known as grassy biomes) are widely considered to be of lower conservation priority compared to forests (Veldman et al. 2015). The importance of grasslands in terms of biodiversity and climate change mitigation is not widely recognised; for example, it is estimated that grasslands can capture 60 kg of carbon per hectare per year (Bilenca & Minarro 2004). It is crucial that international environmental agreements, such as the United Nations Framework Convention on Climate Change, formally recognise grasslands and their environmental values (Veldman et al. 2015).

The report states that the World Resources Institute and the International Union for Conservation of Nature (IUCN) misidentified 9 million square kilometers of ancient grassy biomes as providing “opportunities” for forest restoration. Establishment of forests in these grassy biomes would devastate biodiversity and ecosystem services. This is avoidable if the distinct ecologies and conservation needs of forest and grassy biomes become better integrated into science and policy (Veldman et al. 2015).

Conservationists working for the Southern Cone Grasslands Alliance have long been observing a worrying trend; since the 1990s, millions of hectares of grasslands across Uruguay, Argentina, Brazil and Paraguay have been planted up by alien species, mainly with fast growing pines and eucalyptus trees. In Uruguay, for example, the infrastructure needed for afforestation activities is subsidised by the state. After the country’s second forestry law in the nineties, the afforestation of exotic species expanded exponentially, reaching 1.8 million hectares by 2013 (DIEA 2013). Afforestation and forest expansion are of concern because the conversion of grassy biomes to tree plantations or forests comes at a high cost to biodiversity and ecosystem services (Veldman et al. 2015).

The Southern Cone Grasslands Alliance is working with governments across the four countries to encourage the incorporation of grasslands conservation within policies. They have developed a statistical tool, the Grasslands Conservation Index (GCI), which measures the impact that cattle ranches have on the regional grassland ecosystem. It is enabling the Alliance to develop best practices for the management of grasslands and the GCI has been endorsed by the Ministries of Agriculture and Environment of the six governments within the Southern Cone. It is hoped that the GCI will be included within governmental policies for the sustainable management of natural grasslands to counteract afforestation and agricultural intensification.

Recommended Citation:
BirdLife International (2016) Afforestation can be bad for biodiversity. Downloaded from http://www.birdlife.org on 06/02/2023