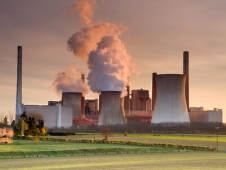 Acid rain has been implicated in population declines of several bird species in the USA and UK.

Vehicles, domestic heating, power-plants, factories and agriculture all pollute the atmosphere significantly with sulphur and nitrogen compounds. These chemicals can be transported long distances in the atmosphere before falling as acid rain, which can cause major economic damage to plantations, crops and human health. Acid rain has been implicated in population declines of several bird species breeding in the eastern USA, particularly in high elevation zones with low pH soils(Hames et al. 2002). Despite clean-air legislation, many eastern regions of North America continue to experience acid rain, and many bird species breeding in these areas show unexplained population declines (Hames et al. 2002), including threatened species such as Bicknell’s Thrush Catharus bicknelli (Vulnerable) (BirdLife International 2004). Long-term acid deposition has depleted the available calcium in acid-sensitive soils, and emission standards may be insufficient to ensure their recovery (Hames et al. 2002). The lack of available calcium in the environment may be a key factor in explaining these bird population declines. In the UK, a study found that eggshell thicknesses of four species of thrush Turdus have declined over the past 150 years (Green 1998). This decline was evidently not caused by organochlorine pollution, because it began long before the introduction of DDT. A likely explanation is that acid deposition has caused a reduction in the availability of calcium, and that this has reduced the quality of eggshells laid by thrushes. Such a mechanism is also suggested by experimental work on Great Tit Parus major in the Netherlands (Graveland 1998) and Estonia (Tilgar 2002).