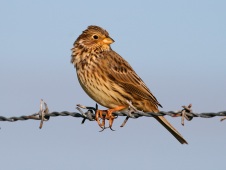 In the European Union, set-aside has provided valuable food and nesting sites for many farmland birds whose populations were declining, due to agricultural intensification. The proposed abolition of set-aside is of great concern, not only for birds, but because the greater use of fertilisers associated with growing biofuel crops will lead to increased water pollution and other environmental damage.

Population trends of Corn Bunting Emberiza calandra in East and West Germany in relation to set-aside.

Set-aside was introduced in 1992 to remove land from production and reduce the size of Europe’s grain mountains. Although not introduced as an environmental measure, set-aside offered significant environmental benefits: for example, it provided farmland birds with ample food in winter and undisturbed nesting sites in spring. The populations of many farmland species had been declining since the 1970s, and set-aside land gave them a valuable lifeline.

For example, the Little Bustard Tetrax tetrax was once common in open fields in many parts of Europe, but intensive agriculture has now driven this bird to extinction in at least 11 European countries (BirdLife International 2008). The remaining population in France has crashed by over 90% in the last 20 years, and it now depends on set-aside for its survival (BirdLife International 2006; Wolff et al. 2001). In East Anglia, 80% of Eurasian Linnets Carduelis cannabina spend the winter on set-aside, compared to 1% on winter cereals (Cook 2008).

In 2007, due to the recent boom in biofuels and increasing demand for cereal crops, the European Commission suspended set-aside for the 2008 harvest year, and has now proposed to abolish set-aside completely as part of the 'health check' of the Common Agricultural Policy. As a result, much set-aside land has been turned into maize and rapeseed crops, further reducing habitat availability for many farmland birds.

In Germany, rapeseed fields have expanded to 1.1 million hectares, 30% of which is on set-aside land (NABU 2008), dramatically reducing the availability of key habitats for species such as the Corn Bunting Emberiza calandra (Flade 2007). In the UK, a government-funded study suggests there will be an 85% reduction in temporary fallow land and a reduction of up to a third in set-aside land (Cook 2008).The promotion of unsustainable biofuels will not only affect bird populations through the loss of set-aside and conversion of grasslands to arable crops. The intensification of agriculture will also lead to increased water pollution and other environmental damage from greater use of fertilisers associated with biofuel production (BirdLife International 2008b).