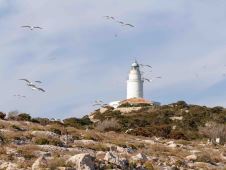 Isle of Conejera is one of the last remaining undeveloped islands in the Balearic archipelago and home to a colony of Critically Endangered Balearic Shearwater Puffinus mauretanicus. SEO/BirdLife (BirdLife in Spain) is lobbying local authorities to drop controversial and potentially devastating plans to turn the island’s lighthouse into a hotel.

The Isle of Conejera is one of the last remaining virgin islets in the Balearic archipelago. It is home to one of the best preserved colonies of the critically endangered Balearic shearwater Puffinus mauretanicus (over 200 pairs). A monitoring programme is currently run by SEO/BirdLife and collaborators.

In addition to the Balearic shearwater, the islet also holds breeding Cory’s shearwaters Calonectris borealis, and a colony of near threatened Audouin’s gull Larus audouinii (200-300 pairs). The Natural Reserve is also a stronghold for the (Mediterranean) European storm-petrel Hydrobates pelagicus melitensis, with over 1000 breeding pairs estimated. Other values include an endemic subspecies of the “Ibizan lizard” (species endemic to Ibiza & Formentera), as well as endemic species of snails and beetles.

The proposed hotel could contravene the current legislation, and would pose a threat to the local biodiversity. In the case of the seabirds, it would be a source of disturbance, particularly considering that some shearwater nests (both of Balearic and Cory’s) are located by the lighthouse. In addition, making it a regular human settlement increases the risk of introducing terrestrial predators, most likely rats and mice, but potentially also cats. These would have a negative impact on the breeding performance of the local seabirds.

The idea of converting a lighthouse into a boutique hotel in such a well preserved and sensitive site has been controversial from its very beginning. It has been proposed by “Grupo Matutes”, led by the very well known (and former minister) Abel Matutes. The council of San Antoni, the closest town to the Isle of Conejera, has publicly expressed its concerns and supports the continuation of the already on-going educational and research activities in the islet. The regional government has so far remained silent with regards to a potential authorisation of this Project.

SEO/BirdLife and other local organisations, such as the Ibiza Preservation Fund and GEN-GOB, have organised different activities and round-table debates to discuss this topic, receiving large social and media attention.

Recommended Citation:
BirdLife International (2014) A Spanish stronghold of Europe’s most endangered seabird is threatened by a hotel development. Downloaded from http://www.birdlife.org on 28/06/2022