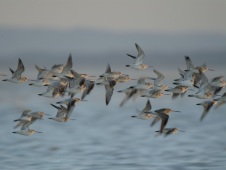 Important Bird Area (IBA) networks can support a high percentage of some populations and are particularly important for migratory bird species. Wetlands International, BirdLife International, United Nations Environment Programme with the Global Environment Facility (UNEP-GEF), the German Federal Agency for Nature Conservation (BfN), and the United Nations Office for Project Services (UNOPS) joined effortes to undertake a four year (2006-2010) Wings Over Wetlands (WOW) Project, with further support and cooperation from a number of partners and donors, such as the Ramsar Convention on Wetlands. This project assessed IBA networks for their coverage of 300 waterbird species across their African-Eurasian flyway. Efforts were made to improve the integrity of these networks by filling the gaps identified, and a Memorandum of Cooperation was signed in 2010 to consolidate these efforts.

Networks of Important Bird Areas (IBAs) can make an important contribution to conserving birds and other biodiversity. Site networks are particularly important for migratory species, as individuals may use many different sites, often separated by thousands of kilometres, at different stages of their annual cycle. For migratory species it is therefore particularly important to establish how well the network of IBAs may be functioning and take appropriate action to try to fill any gaps.Lack of enforced protection along any section of a migratory species’ flyway can undermine any efforts elsewhere.

BirdLife International and Wetlands International are working closely together on the ‘Wings Over Wetlands’(WOW) Project. Through WOW, critical networks of sites are being identified in the area of the African–Eurasian Waterbird Agreement (AEWA) for populations of 300 waterbird species, many of which are migratory. In order to assess whether the IBA network is adequate to support each population during both breeding and non-breeding seasons, the average number of individuals recorded in the whole IBA network during each season is compared with the total size of the population (estimated in Delany and Scott 2006). Ignoring those waterbird species for which no population data are available and those for which a site-based approach is inappropriate (because they are non-congregatory at that stage of their annual cycle), during the breeding season about 30% of populations had good or very good coverage by the IBA network (see figure), while over half of the populations considered had low coverage. During the non-breeding season, when many waterbird species are more congregatory, coverage was higher, with over half of populations having good or very good coverage by the IBA network, while about one third of populations had low coverage.

This analysis demonstrates how effective the IBA approach can be, often capturing a large proportion of the total population at relatively few key sites. However, it also illustrates the importance of regularly reviewing IBA networks and the need for improving the network for some populations.

The project generated innovative conservation tools, such as a Critical Sites Network (CSN) Tool, a Flyway Training Programme, and produced a capacity development framework to support and enhance conservation efforts of the African, European, and south-west Asian countries included in the African-Eurasian Flyway. The CSN tool provides decision-makers and site managers with key information to avoid damaging areas that are important for waterbird conservation.

Additionally to focusing the African-Eurasian Flyway, the WOW Project helped to generate stronger partnerships by supporting field projects situated in eleven wetland areas across Estonia, Hungary, Lithuania, Mauritania, Niger, Nigeria, Senegal and The Gambia, South Africa, Tanzania, Turkey, and Yemen. While focusing on wetland conservation, the projects also tackled management planning, ecotourism, field research, wetland restoration, invasive species control, and education (WOW, 2011). WOW concluded on a positive note, having achieved most of the goals set out in planning and acquiring invaluable knowledge. The commitments made during this four year project were renewed at the International Waterbird Conservation Symposium in 2010 by the Ramsar Convention on Wetlands, the African-Eurasian Waterbird Agreement (AEWA), Wetlands International, and BirdLife International. These partners signed a collaborative agreement to enhance their conservation efforts across important Africa-Eurasia sites for migratory waterbirds, with broad goals outlined as:

This consolidation of efforts and cooperation highlights the importance of international efforts, particularly for species like migratory waterbirds that are subject to the laws and threats of multiple countries.

Recommended Citation:
BirdLife International (2017) A network of critical sites for migratory waterbirds is being identified across Africa and Eurasia. Downloaded from http://www.birdlife.org on 29/01/2023