A landscape approach to conservation can help tackle climate change 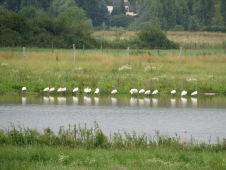 The impact of climate change will be especially severe in low-laying regions such as the Netherlands. Vogelbescherming Nederland (BirdLife in the Netherlands) is helping to restore wetland habitats as part of a coherent nationwide conservation strategy. By establishing a natural ‘climate buffer’ the project will conserve wetland habitat for important populations of birds as well as help ameliorate the impacts of climate change.

With its largest rivers tamed by dikes and dams, and the Zuiderzee dammed to form the IJsselmeer, the Netherlands thought it had won the battle against water. However, as a result of climate change sea levels are rising. At the same time, the Netherlands is sinking due, among other things, to intensive draining and to the disruption of natural processes, such as silting and peat formation. The cost of containing the sea behind hard sea-defences of asphalt, steel, basalt and concrete is becoming prohibitively expensive.

As sea levels rise, the rivers and storage basins on which land drainage depends are less able to carry water to the sea. This is already happening in the Netherlands, especially when north-westerly gales and heavy rain combine. Extreme precipitation is causing more flooding in river and stream basins, damaging property and agriculture and overflowing sewer systems. Conversely, low river levels in summer, contributed to by retreating glaciers in the Alps, will lead to water shortages and deteriorating water quality, and will affect commercial shipping, farming, recreation, and natural ecosystems.

To counter these threats, natural ‘climate buffers’ have been developed as part of a landscape management approach to climate change. Buffers can be created by relocating river dikes, developing and restoring overflow areas and reed marshes in the alluvial plain, broadening tributary river mouths to slow outflow into the river, extracting clay and sand along contour lines (a source of sustainable building materials), and digging bypasses or even completely new rivers. Vogelbescherming Nederland (BirdLife in the Netherlands) has undertaken one such initiative in the Gelderse Poort Important Bird Area, as a partner in the Ooijpolder ‘climate buffer’ project (Climate buffer coalition 2009). The area supports a significant winter roost of Greater White-fronted Goose Anser albifrons (max. 100,000 individuals) and is home to European Action Plan species, such as the Great Bittern Botaurus stellaris and the Near Threatened Corncrake Crex crex. The project has restored natural wetland processes and the habitats, such as reedbeds, water meadows and marshes, on which these species depend.

These new wetlands contribute to the Dutch Ecological Network—a national strategy to interconnect the country’s natural areas. Linking wetlands and other habitats increases their ecological resilience and facilitates the movement of species. This will become increasingly important as climate change forces species to shift their ranges.