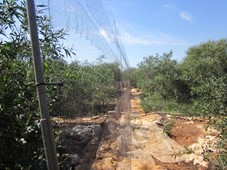 Detailed guidance is widely available on methods for monitoring bird population abundance, but little information is available on methods to monitor illegal killing and taking of birds. BirdLife has developed a guide to provide the principle elements of each aspect of such monitoring, illustrated by a series of case studies describing different approaches applied in selected countries.

Overexploitation, in particular illegal killing and taking, is one of the main threats driving birds towards extinction globally (BirdLife international 2013), and is known to be a particular and growing issue of concern, especially across the Mediterranean (e.g. Schneider-Jacoby & Spangenberg 2010, CABS 2014), Brochet et al. 2016).

Many stakeholders have a strong commitment to addressing this issue and are collecting relevant data, but very few do so as part of a systematic monitoring scheme generating reliable quantitative estimates of the number of birds killed/taken per year. This guide, relevant for all stakeholders, aims to facilitate expansion of new monitoring and increase the robustness of existing schemes. The guidance covers the following points, among others:

• Monitoring illegal shooting by recording indirect evidence, such as the number of poachers seen, shots heard, cartridges/decoys/carcasses found, may be easier than recording direct evidence. The number of individual birds illegally shot can be then estimated using data on shooting ‘success’.

• Monitoring illegal trapping by recording length of mist-nets or the number of traps may be the most appropriate way to monitor trapping methods for which visible evidence remains. The number of individual birds illegally trapped can be then estimated using average success rate per trap per unit time and average species composition of the catch. For traps that leave no visible evidence when they are not in use, interviewing may be a more appropriate method.

• Monitoring illegal poisoning may be possible using surveillance patrolling in known poisoning areas, during the period of targeted bird presence, to record all the direct and indirect evidence, such as the number of poison baits, number of carcasses or remains found, identity of the species targeted etc.

• Monitoring illegal bird trade by visiting markets should allow the number of individuals and species in trade to be monitored. If traders feel free to discuss, extra information from vendors and customers can be also gathered through informal interviews about the processes of the trade.

The principle elements of each aspect of a monitoring scheme for surveying different types of illegal activities are summarised in the Guide, illustrated by a series of case studies describing different approaches applied in selected countries. Whether data collection by regular monitoring is possible or not, casual records of illegal activities are also useful if systematically documented. The Guide promotes the use of consistent, replicable approaches, but no single method can be applied in all countries and all may need to be adapted to country-specific conditions. It is worth also considering where in the ‘supply chain’ it is most efficient and effective to concentrate effort, from poachers in the field to sellers in illegal trade.

It is a priority to implement monitoring of the illegal killing and taking of birds using systematic sampling protocols and to manage these data systematically to generate robust data on trends in illegal activities over time and to help stakeholders prioritise conservation actions to address this international conservation problem.

Recommended Citation:
BirdLife International (2016) A best practice guide for monitoring illegal killing and taking of birds. Downloaded from http://www.birdlife.org on 30/01/2023